Season 4 Who Do You Think You Are? Australia, Starts March 27th 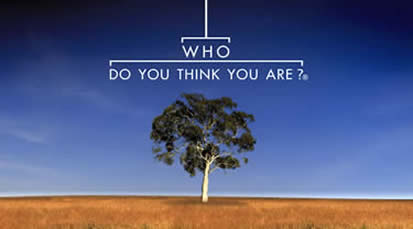 For those of you who’ve been hanging out for the new 4th season of Who Do You Think You Are? Australia TV show, it’s starting very soon … Tuesday March 27th, 7.30pm, SBSONE to be exact.

Following the journey of six more Australian celebrities as they discover their history and where they came from. Those in this 4th series are:

First up, is Shaun Micallef, which will air on Tuesday March 27th, and here’s the SBS writeup for it: Comedian Shaun Micallef was never told much about his family’s past and is worried that his ancestors will all be a bit dull. He begins his journey by investigating his maternal line. It leads Shaun to a most unexpected place, Turkey, and the discovery that his great, great, great grandfather on his mother’s side fought in an epic battle and had a brush with one of the most famous women of the eighteenth century. But what he discovers on his father’s Maltese side of the family will amaze him even more.

The second episode in this series will feature Kerry O’Brien, on Tuesday April 4th.
Television journalist Kerry O’Brien was born in Brisbane into a working class, Catholic family. He embarks on a journey to find the first of the O’Briens to come to Australia and to test the validity of some old family myths. He discovers ancestors fleeing from the terrible potato famine in Ireland in 1850; taking the perilous voyage on a disease ravaged ship to their new homeland. Kerry’s great, great grandfather, Charles, goes on to become a businessman and hotelier. But as Kerry delves deeper, he finds that Charles’ fortunes slide just as fast as they have risen.

The SBS site doesn’t have scheduling beyond that on their website yet, but watch SBSONE at  7.30pm, each Tuesday for 6 consecutive weeks and you’ll see them all.

And if you’re truly loving this series, you’ll be pleased to know that Who Do You Think You Are?  Australia Season 5 is in the works, which maybe/hopefully will air later in 2012.