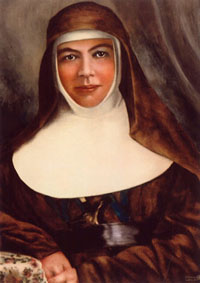 Mary Helen MacKillop (1842-1909) was born in Fitzroy, Victoria. Her father, Alexander, was educated in Rome for the Catholic priesthood but, at the age of 29, left just before his ordination. He decided to migrate to Australia and arrived in Sydney in 1838. Her mother, Flora MacDonald, left Scotland and arrived in Melbourne in 1840.

They were married in Melbourne on 14 July 1840 and had eight children. Mary, Margaret (Maggie), John, Annie, Alexandrina (Lexie), Donald, Alick and Peter.

Mary MacKillop started work at the age of 14 as a clerk in Melbourne and later as a teacher in Portland. To provide for her needy family she took a job as governess in 1860 at her aunt and uncle’s place at Penola, located 388km south east of Adelaide.

Famous for the quality of it’s red wines, the town is also famous as the central location in the life of Blessed Mary MacKillop, the first Australian to gain sainthood.

Mary MacKillop’s canonisation will be featured on Foxtel’s History Channel. The station has commissioned a new documentary “Blessed Mary: A Saint for All Australians” to commemorate the historic canonisation of the revered nun in Rome on October 17. Hosted by Alan Jones, the hour long special will premier on Sunday October 10, at 7pm.

Related Links:
– Visit the ABC website to read the announcement of her Sainthood.
– As expected Mary MacKillop does appear in Wikipedia with a lengthy entry.
– If you’d like to read up more about Mary’s life and her journey to canonisation, the official Mary MacKillop website has plenty of info, together with a clock counting down until her canonisation.