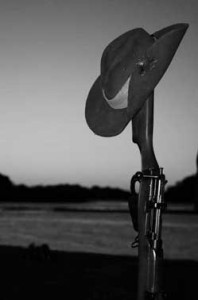 There’s no doubt that 2014 is the year military historians have been working towards for years as it marks the 100 year anniversary of the start of World War 1.  The Great War. The “war to end all wars”.

As you can imagine there are literally thousands of World War 1 projects going on right around the world. Some big, some small. All important in recording history. And it’s going to be hard keep up with them all, but through a series of “World War 1 Projects” posts I shall share at least some of them with you.

To keep the length of this post in check, I have had to omit some of the projects that had already been submitted to me. But don’t worry, they shall be in my next World War 1 Projects post. And if you’d like to add information about your own WW1 project please feel free to email me, Alona.

For anyone who is working on an Australian WW1 Project, you might like to also submit details to the World War OneLink website. This is due to be launched in December 2013.

NATIONAL ARCHIVES OF AUSTRALIA and the NEW ZEALAND ARCHIVES
Discovering Anzacs
The National Archives of Australia and Archives New Zealand are working together to build a new website, Discovering Anzacs. This website will have a unique profile of every Anzac who enlisted in World War I, linked to their service record. You can help tell the story of Australia and New Zealand during the war by building on profiles and adding your own family stories, photos or details of their service.

Here’s a short video about the project …

STATE LIBRARY OF QUEENSLAND
Q ANZAC 100: Memories for a New Generation
The Q ANZAC 100: Memories for a New Generation is a five-year program of legacy initiatives that will commemorate 100 years of World War One and Anzac history. The State Library of Queensland, in partnership with Queensland’s cultural heritage sector has an extraordinary opportunity to uncover new Queensland stories and treasures, and generate insights, conversations and experiences that honour and embrace the enduring Anzac spirit.

This commemorative initiative is a 21st Century response that engages with communities across regional Queensland and embraces new technology. It will help all Queenslanders learn more about the Queensland story.

STATE LIBRARY OF NEW SOUTH WALES
WW1 Projects including hundreds of War Diaries
To document the war to end all wars the State Library of NSW began collecting the personal stories of soldiers (their diaries, letters, photographs and drawings), from right back in1918, to give a picture of the war from those who lived it. This amazing collection which includes 1140 volumes of diaries written by over 500 servicemen and women, is supported by newspapers, photographs, maps and other ephemera. The Library’s collections are some of the richest, but also least known records of the Australian experience of WWI. And digitising these diaries is a priority for the State Library of NSW.

Together with the war diaries, the Library has created a portal for visitors to their website which leads to further WW1 records, together with help for those researching military history. 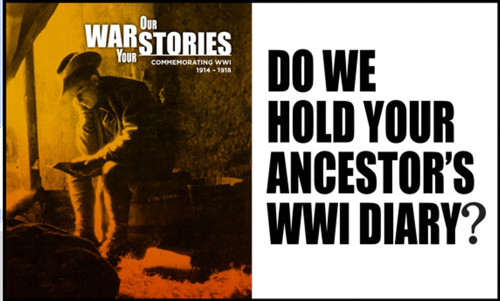 STATE LIBRARY OF SOUTH AUSTRAIA
New ANZAC Resources
The State Library has been busy working on a number of WW1 projects. The first being a collaboration with State Records, and launching a digitised collection of images of “South Australians of World War 1” which is viewable of Flickr and currently has over 1400 photos. The State Library also has in it’s collections the original South Australia Red Cross Information Bureau’s WW1 enquiries files. These records contain as many as 8000 requests from family and friends trying to trace wouded and missing soldiers. These enquiries has now been sorted, and being digitised by Library staff. Andrew Piper, Manager of the State Library’s Online Projects says that “we will build an indexed web resource of these records, which we plan to release in 2015 to coincide with the centenary of the Gallipoli landing”.

The State Library has also developed a self-guided walking tour of the War Memoorials of Adelaide. It is one of a series of toure they’ve been developing for mobile devices. You can find details of these on their website.

DON’T FORGET THE DIGGERS
The Great War Collage
Stuart Curry is the man behind a number of WW1 related websites with “Don’t Forget the Diggers” being one of them. This is a photographic archive of Australian ww1 soldiers and personnel from the Great War. These are photos from personal collections together with other resources. Some photos show the precise location on a interactive Google map.

Together with putting information online, Stuart sees the need to connect with the older generation. The ones who don’t use computers, but wouldn’t mind visiting something special on in their local area. So to connect with these people he’s come up with display stands to show around the country to help find and identify Digger WW1 photo collections. So his aim is to connect with the young and the old.

GRAVESECRETS
WW1 Pictorial Honour Rolls & more
Faithe Jones, together with her team of volunteers have done an amazing job with creating pictorial honour rolls of Australian men in WW1. Currently listing over 15,500 pictures, the collection continues to grow, and so do their research interest. As they’ve just started work on two new projects.

The Lost Heroes of the Great War project relates to the photos of military men and women that many have in their possession, but sadly have no details to identify them. This website is for people to post photographs of Australians such as these in the hope that other members of the public have the same photograph and are able to help with identification. The other project Faithe is currently working on is compiling details of the “World War 1 Australian Army Nursing Service“. If you wish to contribute to any of her project, you’ll find contact details on the websites mentioned.

GENEALOGY SA
Centenary of ANZAC 2014-2018 Project
Do you have any family member/s from South Australia who served in World War One? Would you like to share their story? Genealogy SA (formerly the Sough Australian Genealogy & Heraldry Society) has launched the Centenary of ANZAC Project. If you can assist by providing any information please email saghs.admin@saghs.org.au.

KU-RING-GAI HISTORICAL SOCIETY
World War One Project
The Ku-Ring-Kai Historical Society is currently undertaking a large project to identify and write biographies of all those on WWI memorials in Ku-ring-gai.
“Are you researching a WWI Ku-ring-gaisoldier? Have you talked to the coordinators of our WWI Writer’s group about your research? There are so many soldiers on memorials around Ku-ring-gai that we’d hate to double up on our efforts, i.e. have more than one person write up a particular soldier. So, if you are researching or writing, or would like to,please contact Kathie Rieth first on frithie@netdata.com.au. We have some great resources, and an eager team to help you.” 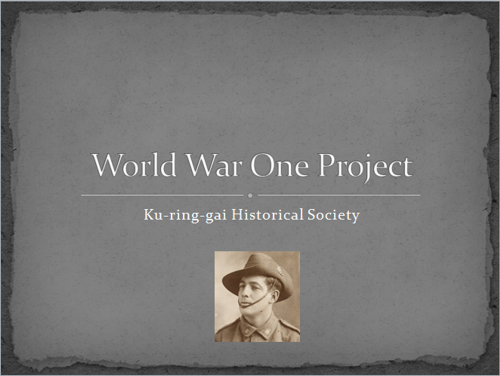 TELEGRAPH POINT COMMUNITY ASSOCIATION
WW1 Soldiers from Telegraph Point
The Telegraph Point Community Association is working on a project covering the World War 1 Soldier’s from Telegraph Point and surrounding areas in New South Wales. If you can help out, or wish to know more about the project please contact Therese Glen-Holmes theresegh@internode.on.net or Ken Greenwood ken.greenwood@bigpond.com.

NEW ZEALAND GOVERNMENT
First World War Centenary Programme
The Heritage Services Branch of the Ministry for Culture and Heritage is developing a series of print and digital projects to commemorate the centenary of the First World War in 2014-18. Currently working on a major web project and a series of books exploring the impact of the war on New Zealand society during and after the conflict. Further projects will be developed over the coming years.

NEW ZEALAND GOVERNMENT
New Zealand WW100
This site is a MUST-VISIT for anyone with New Zealand WW1 soldiers in their family. Created by the NZ Government, the WW100 Programme Office within the Manatū Taonga – Ministry for Culture and Heritage maintains this site on behalf of participating organisations, and particularly:
– New Zealand Defence Force
– Ministry of Foreign Affairs and Trade
– Department of Internal Affairs 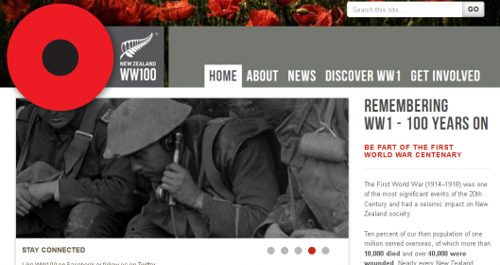 DEVON COUNTY COUNCIL & A NUMBER OF PARTNER ORGANISATIONS
Devon Remembers
More than 11,000 Devon men and women died in the Great War, and starting next year for four years, people young and old will be marking the centenary in their own personal way.  Communities will also be coming together to discover stories about their shared past and forging new relationships for the future. The project is called Devon Remembers, and its focus will initially be on the restoration of public war memorials that commemorate WW1.

There were an estimated 2,000 war memorials created in Devon at the end of the Great War, in local communities, as well as by schools, clubs, churches and even businesses. While many memorials survive and are maintained, many have fallen into disrepair and lie largely unnoticed. The restoration project complements work that the Royal British Legion will be carrying out over these centenary years.  They will be encouraging schools and their pupils to work with local RBL branches to find out as much as possible about those whose names appear on the memorials.   Their research will contribute to a national project run by the Imperial War Museum.

A BARNSLEY HISTORIAN’S VIEW
Barnsley War Memorials Project
Linda is a blogger, and has a passion for the history of Barnsley in South Yorkshire. She together with a number of other historians in the area have been busy creating the Barnsley  WW1 War Memorials Project. Visiting the monuments in person, documenting them, and searching through the digitised Barnsley Chronicle newspaper for mentions of war memorials after the First World War.
=======================

SARAH KOGAN
Changing the Landscape
Changing the Landscape is a visual arts project by Sarah Kogan. It was inspired by the unpublished collection of 150 daily letters and photographic postcards written and illustrated by her great uncle, Barney Griew, who was a map maker and scout who died in The Battle of the Somme, 1916. For something truly different, visit Sarah’s site.

TYNEMOUTH COMMUNITY
Tynemouth World War 1 Commemoration Project
The former Borough of Tynemouth marked that loss with a Roll of Honour published in 1923 containing very brief details of some 1,700 local residents known to have lost their lives due to causes associated with the war and their service.  The project has been formed with the aim of reminding the population today of that loss and also to explore the social and economic consequences for the town and its inhabitants.  A large-scale research effort is in progress in order to expand greatly the biographical information about as many as possible of the names on the Roll of Honour. When as much information as can be traced has been entered into an electronic database the public will have availability via the internet.

SHEFFIELD SOLDIER WW1
Sheffield Soldiers of the Great War
The aim of this site is to record details by way of a tribute, of all men and woman, who served in WW1 and were either born or resided in Sheffield. Upwards of 50,000 men went from Sheffield to the various ‘Fronts’ during the Great War. It was a great adventure for thousands of them, as their lives revolved around work during the week and chapel on Sunday. Most never having left the city boundaries never mind ‘journeying to’ a foreign country. Tragically thousands were killed, with many thousands more maimed and scarred for life. Some dying years later from the effects of their injuries or from gas poisoning.

While it is a massive task, Dean Hill and Stuart Reeves have taken on as they felt a need to do it to record this important part of Sheffield’s history.