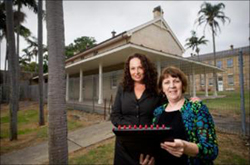 Back in January I did a post asking people to sign a petition to help save Parramatta’s Historic Female Factory. You can read the full post here.

Now we finally have some good news for lovers of Australian heritage. The Parramatta Advertiser has just reported the following:

…  victory for supporters of the historic Female Factory – it has been saved from State Government desecration.

The fight against the Health Department’s plans to turn the third-class sleeping quarters of the Female Factory into a data room, with no public consultation, started last December.

Others weighed into the fight, including Parramatta Heritage Centre curator Gay Hendriksen, who formed the Female Factory Action Group (PFFAG).

Ms Djuric’s Female Factory Precinct Association and PFFAG were able to bring politicians and political candidates from all sides on board.

Ms Djuric told the Advertiser she wanted to see the whole historic precinct – the asylum (Cumberland Hospital), girls’ home site and female factory – become a heritage district similar to Port Arthur or The Rocks – an idea put by former Premier Nathan Rees who is a keen supporter of the site.

Ms Hendriksen said she was thrilled when the Health Department announced it would no longer use the room for data storage.

“This is a site of international significance and should be recognised as the cultural icon it is, as the earliest still-surviving convict female site in Australia”, Ms Hendriksen said.

Thank you to all who took the time to sign the petition, as well those who helped get the word out there, I’m sure it helped in the decision.

This is great news not only for the Parramatta Female Factory Precinct itself, but also Australia’s convict heritage as well.

Australian Genealogy and History Snippets – May 2016