As a way to help celebrate our Australian heritage on Australia Day, fellow Aussie genealogy blogger Shelly from TwigsOfYore has suggested a theme of finding a document relating to your earliest Australian ancestor and writing about it.

As such … let me introduce you to my great-great-great-great grandpa Isaac Richardson. First just a little of his background. Born in Somersetshire, England in 1804, Isaac was the oldest of 10 children born to Benjamin and Esther Richardson (nee Moore). During his childhood the family moved from Somersetshire to Kent where his father was a clock and watchmaker.

During the early part of the 19th century the Agrarian Revolution, as well as the Industrial Revolution was taking place, which made times difficult, and wages fell and unemployment increased.

By the mid 1820s, Isaac was married with two children. Both he and his brother Simeon became involved in the ‘Swing Riots’ (also known as the ‘Kent Machine Breakers’), protesting against the poor living conditions, low wages and the introduction of machinery.

Wednesday 24 November 1830 was the day that changed Isaac and Simeon’s life forever, as they, along with others were arrested for rioting. They were sentenced to death, but a petition from the local townspeople saved their life, and they were then transported for ‘Life’ to Van Diemen’s Land instead.

Prior to being transported, Isaac and Simeon were sent to stay on the prison hulk “Retribution”. And thanks to Ancestry.com.au having put these records online, I now have a record documenting this.

Available to view online this, together with the “Physical Description record” as well as the “Appropriation List” (who he was assigned to – which is pictured below) are all on the Archives Office of Tasmania website and available to search, view, and print for FREE. Awesome work from this Australian Archives!! 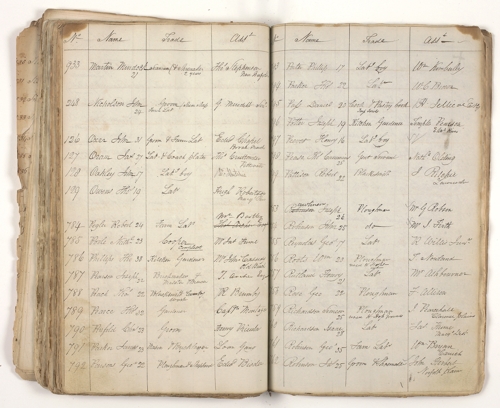 So without going into the whole of Isaac’s life, it did turn out pretty good for him, considering he was sentenced to death at age 25.

He was assigned as a labourer to James Hume, in Campbell Town (Tasmania), and managed to stay out of too much trouble, which was no doubt a contributing factor when he was granted a Conditional Pardon in 1842.

Matilda, Isaac’s wife managed their two children for seven years on her own, before finally being granted assisted passage to emigrate to Tasmania in 1837/38. So it took a while, but they were a family again. Seven more children were born in Tasmania, he became a watchmaker, no doubt having learnt something of the trade from his father, and he lived to the age of 69.

I really do believe that everyone has an interesting story, and this is just ONE story about ONE of my fascinating relatives. Thanks again to TwigsOfYore for coming up with this blog idea, and allowing me to share a little of my history. I do look forward to reading the posts by others on this topic.