After putting the call out for information on World War 1 Projects that people were doing, I posted World War 1 Centenary Projects #1, but there were simply too many projects to include in a single post, so here is list #2.

If you’d have any World War 1 project that you or any organisation that you know of is involved with that you’d like mentioned here, please send me an email alona@gould.com.au.

WAR LETTERS 1914-1918
http://warletters.net
This is a new website created by Mark Tanner, which is based on the research undertaken for the forthcoming War Letters 1914–1918 series of books. The site provides links to a vast range of online, open access primary and secondary historical sources about the First World War. With separate sections on Australia, New Zealand, Gallipoli and the Western Front, the site has links to official histories, government documents, service records, unit diaries, bibliographies, theses, legislation, memoirs, letters and diaries, films, maps images and much more, all available freely online. 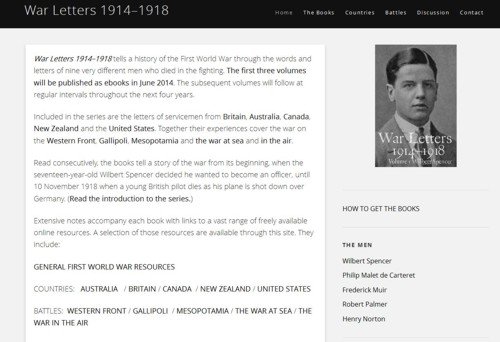 WW1 REVISITED
http://ww1revisited.com
WW1 Revisited is a new website by military historian Paul Reed. Join him as he travels and photographs what remains of the battlefields of the First World War: from cemeteries and memorials, to old trench lines, bunkers, mine craters and shell holes.

THE BIG PICTURE
http://www.thebigpicture.org.uk
http://www.military-research.co.uk/the-big-picture-a-very-special-commemoration-project/
I have to thank Scott Addington for this one, as it was a tweet by him that led me to discover The Big Picture. And wow, what a project. In his words … “The Big Picture is a large scale public video and projection project designed to inspire the population not just of Britain, but across all of Europe and beyond by commemorating the 100 year anniversary of the First World War in a truly unique and breathtaking way. Video graphics, animations, infographics and other imagery will be projected directly upon some of Europe’s most iconic buildings throughout the centenary period. The immense size of these projections will literally stop traffic! By combining the traditional themes of Remembrance with contemporary design techniques such as infographics and data visualisation The Big Picture will offer a truly unique and inspiring way for the general public to reflect and commemorate the First World War.” For Scott’s full post about this Project click here.

THE DIGGERS VIEW, WW1 IN COLOUR
http://thediggersview.com.au/project.html
The stories of soldiers from New South Wales’ Hunter Region in World War I have been brought to life in a new book by Newcastle author Juan Mahony. The book is a unique and fresh look at Australia and the Great War, as it uses digital technology to show images from the war in colour for the first time. All the images in the book have been painstakingly colourised to accurately portray what the digger’s world was like and how they saw themselves. The narrative text of the participants in ‘The Digger’s View, WW1 in Colour’, further enhances the personal perspective. Set to coincide with the centenary of this important part of Australian history, this is not only an important record for Australian miltiary history, but also for photographic history. 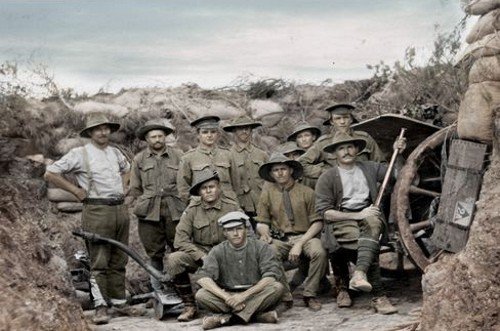 ANZAC ALBANY
http://www.anzacalbany.com.au/
1 November 2014 marks 100 years since the first convoy set sail from Albany, Western Australia carrying Australian and New Zealand troops to the First World War. For many, Albany was their last sight of Australia. Now, generations later, the Anzac legend lives on. Albany is set to host to numerous events during October and November 2014. So be sure to visit their website to see what it is on, as well as for more information about Albany in WW1. 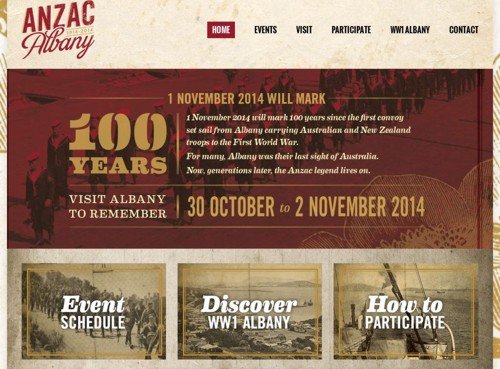 AUSTRALIAN WAR MEMORIAL
http://www.abc.net.au/local/stories/2013/08/01/3815848.htm
Lying on their stomachs and crouched in confined places – busy with power saws, hammers or tiny paint brushes – teams of people are currently hard at work on a major project to redevelop the First World War galleries at the Australian War Memorial. A $32 million dollar project is underway to transform the WW1 galleries at the Australian War Memorial in time for the ANZAC centenary in 1915.  It includes the restoration of the much loved dioramas depicting key battles in the war and the Ascot bullet-ridden boat that landed troops at Gallipoli.

AVENUES OF HONOUR
http://www.avenuesofhonour.org/
Avenues of Honour 1915-2015 is a national project to preserve and promote Australia’s Avenues of Honour as we commemorate the Centenary of ANZAC, the Gallipoli Landings and World War I.  The project is working with local communities across Australia to support efforts to document, preserve and restore Avenues and to plan and establish new ones.

AUSTRALIAN INSTITUTE OF GENEALOGICAL STUDIES
http://www.aigs.org.au/newsandevents.htm
As part of the ANZAC Centenary the Australian Institute of Genealogical Studies (AIGS) will be producing a booklet commemorating the lives of those Australians from the Nunawading area who served in any capacity during WW1. The AIGS are seeking descendants of those who enlisted to serve in this conflict from the present day areas of Nunawading, Blackburn, Mitcham and Vermont and who may have stories, photos etc. they would be willing to share. The launch of this publication is planned for Sunday, 3rd August, 2014 at the Blackburn RSL, Diggers Walk, Blackburn. To inquire about contributing to this booklet, send an email to Shirley as aigspublicity@gmail.com or phone (03) 9872 3189

NATIONAL ARCHIVES OF AUSTRALIA
http://naa.gov.au/about-us/media/media-releases/2014/13.aspx
Do you need proof that you are a descendant of a Gallipoli Anzac? We’re currently focusing on providing access to WWI records to help descendants of Gallipoli veterans claim their rightful place at Anzac Cove for the centennial Anzac Day commemorations next year. 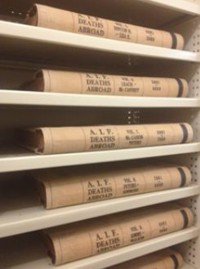 The First World War registrations were compiled under the direction of George Porter, who became Registrar-General in October 1921. Porter was by all accounts a bit of a maverick who did not necessarily rely on legislation to back up his decisions, and he took it upon himself to register the deaths of all the men and women who had, in his words, ‘given their lives for Queensland’.

Porter believed that the registration of the death, and so the ready availability of a death certificate, would provide bereaved families with some form of closure for their lost loved ones, who at best were buried on the other side of the world—the British Empire had a strict policy of not repatriating its war dead—and at worst, had no known grave at all. Copies of the completed death certificates would be made available to the relatives for two shillings.

You can order any of RBDM’s World War One and World War Two certificates online through the search index. The records are currently being digitised and we are hoping to release scans of the AIF Register pages during 2014 as part of the commemorations to mark the start of the First World War.

QUEENSLAND MUSEUM
http://www.qm.qld.gov.au/
For the first time, the Queensland Museum invite visitors to join a guided tour of the Cultural Environments collection with a focus on their World War 1 objects. This special tour will focus on objects in the collection that tell the story of the Queensland home front during the war, the impacts of the war on Queensland and Queenslanders, and the experience of Queensland soldiers overseas.

The World War 1 collection covers a diverse range of objects, each with their unique story about the war and how they ended up in Queensland and in the Queensland Museum collection.  They include helmets, shoes, confiscated equipment, photographs, medals, letters, textiles, trench art, patriotic badges, flags, recruitment posters, shrapnel, fundraising material, rehabilitation art and crafts, and German, Turkish, French and Egyptian souvenirs.

FLEURIEU PENINSULA FAMILY HISTORY GROUP
https://www.facebook.com/groups/FPFHGanzac100book/
http://fpfhg.org/
The Fleurieu Peninsula Family History Group are compiling a book as an ANZAC Centenary Project and they are asking  for your help. Do you have Fleurieu Peninsula pioneer ancestors who were involved in WW1 and would like them included in our book? Do you like research or writing and want to help/mentor someone with their contribution? Do you know people in the local community who are descendants from Fleurieu Peninsula pioneers who they could contact? If you can help out or wish contribute, please email fpfhganzac100book@gmail.com.

KITCHENERS 100
http://www.australiandoctorsww1.com/
Kitchener’s 100 is a new book that is being written that is about 100 physicians who volunteered from Australia in early 1915 5o join Kitchener’s Armies. They joined the Royal Army Medical Corps under a 12 month contract. Several were killed, many stayed on after 12 months, others came home and joined the Australian Army, and three took their own lives after the war. Many were related to well-known members of Australian society, including Premiers, a Prime Minister and the high-ups in the Methodist Church. For more details on this book, be sure to check the website.

ROYAL HISTORICAL SOCIETY OF VICTORIA
http://www.historyvictoria.org.au/
This information came from the RHSV Journal (July 2013), “the Veterans unit within department of Premier and Cabinet is eager to hear what you are hoping to organise or have already firmed up. Large and small collecting organisations are submitting their centenary plans in the hope that Victoria will have a state wide calendar of commemorative events. The calendar will help with co-ordination, cross promotion, timing and it will help to guide the Victorian Anzac Committee’s understanding of what is planned. The RHSV is assisting the Veterans Unit by collecting information from historical societies. Please send your plans, whether confirmed or not, to me kateprinsley@historyvictoria.org.au or phone (03) 9326 9288. 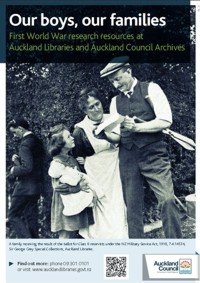 AUCKLAND LIBRARIES
http://www.aucklandlibraries.govt.nz
“Our boys, our families” is a 48 page downloadable research guide produced by Auckland Libraries, to showcase the WW1 resouces available at Auckland Libraries and Auckland Council Archives.

As part of the First World War centenary commemorations, this guide will enable you to carry out your own research into family members or people who took part in the war. This could be a soldier on the frontline, a nurse on a hospital ship or the impact on those at home.

WHO DO YOU THINK YOU ARE? MAGAZINE
http://www.whodoyouthinkyouaremagazine.com/britain-remembers
During the centenary of the First World War, thousands of volunteers across the country will be working on different ways to remember those who lived, worked and fought during 1914-1918. There are hundreds of projects already in progress – some big, some small, but all deserving recognition. Who Do You Think You Are? magazine has created the “Britain Remembers: The First World War Project Map”. This is an interactive map showing WW1 Projects that have already been listed, and therefore ‘pinned’ to a location. If you are are working on a WW1 that relates to the UK, read up more about the Britain Remembers Map, and details on how to submit yours. 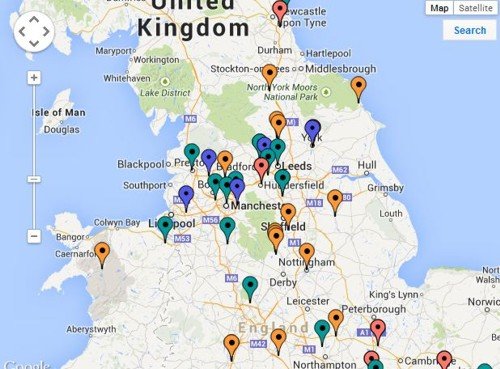 THEGENEALOGIST.CO.UK
http://www.thegenealogist.co.uk
http://www.thegenealogist.co.uk/featuredarticles/2013/discovering-your-ancestors-war-records-through-their-occupations-124/
Researchers can now learn more about teachers who fought during the First World War following the launch of a new record set at TheGenealogist.co.uk. The family history website has now added a scanned version of the 207-page volume National Union of Teachers War Records, 1914-1919, which was originally published in 1920, which details of more than 18,000 members of the National Union of Teachers who signed up to serve their country during the First World War. 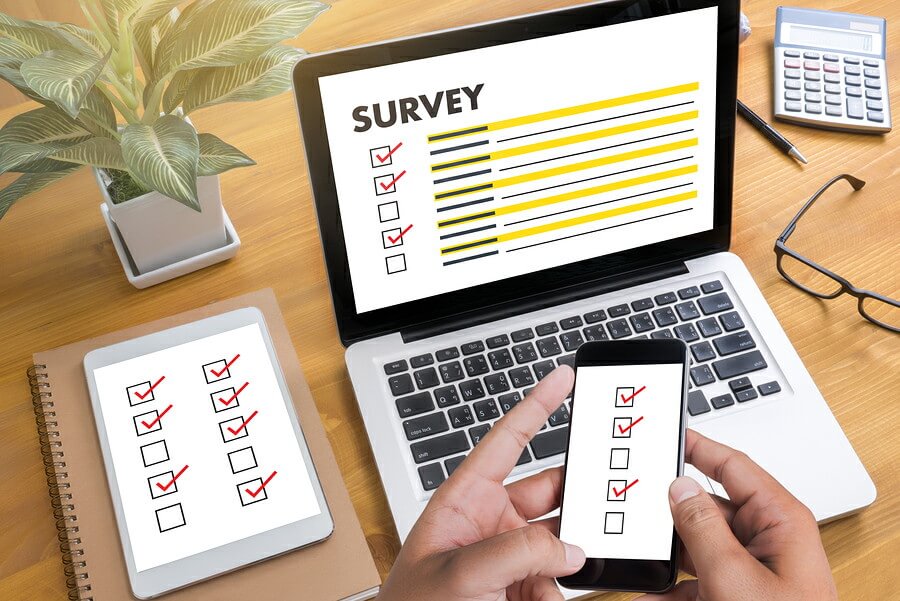 The National Library of Australia Survey