ANZAC Day Blog Challenge is Back for 2014! 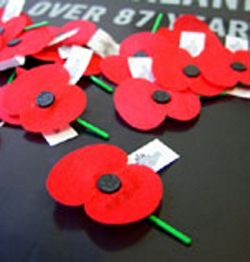 ANZAC Day is the day that is a national day of remembrance for Australian and New Zealanders who served and died in all wars, conflicts, and peacekeeping operations, with the first ANZAC Day. The ANZAC force landed at Gallipoli on 25 April 1915 which signalled the beginning of months of battle with tens of thousands of lives lost. This date was remembered a year later with numerous services in both countries paying tribute to the fallen, and the first “ANZAC Day” was held.

Now back in 2011 the wonderful people ‘across the ditch’ at Auckland Libraries started something by coming up with an ANZAC Day Blog Challenge which gave bloggers the opportunity to write about or commemorate a family member, or someone they knew who was involved in the Australia or New Zealand military.

The idea was a big hit, and it has continued every year since, which isn’t surprising as Australians and New Zealanders like to honour their ancestors who fought for their country. After all these men (and women) left home. Took up arms. Some came home. Some didn’t. Lives were changed forever. Still they were all heroes, and we remember and commemorate them on ANZAC Day.

And with the 100 year anniversary of the beginning of WW1 occurring in 2014, its fair to say that the interest in military history has never been greater. There are countries all around the world who are preparing to take part and contribute to commemorations, with thousands of organisations instigating projects to record memories and consolidate resources online. It is set to be a HUGE few years in terms of military history, and availability of military records.

This is the fourth year that Auckland Libraries and the Kintalk blog have issued the Trans-Tasman ANZAC Day Blog Challenge with the details below:

Do you have a story to share about an ANZAC?

Stories we’d like to hear about could be about their sacrifice, or the way it shaped or impacted on their family history. Maybe you want to blog from the perspective of those that were left behind? Your story doesn’t have to involve a serviceperson who lost their lives – during times of war, all sorts of loss unfortunately are experienced. And you can write about those who also served in other wars, as all who served in Australia and New Zealand are recognised as ANZACs.

Maybe you have written about your ANZAC before, and have more research to add to the story?

– Write a blog post about an Australian or New Zealander serviceman or woman’s family, and the impact war had on their family history
– Post a comment with the URL to your blog on the comments section of their original post
– Or if you don’t have a blog then email us your story at kintalk@aucklandcouncil.govt.nz
– Publish your post by 26 April 2014

After ANZAC Day, all submissions will be listed in a summary posting on Auckland Libraries’ Kintalk blog.

Honour your Anzac ancestors, share their story, and Lest We Forget.

Family History Through the Alphabet – X is for …

Family History Through the Alphabet – D is for …

Family History Through the Alphabet – F is for …

Family History Through the Alphabet – M is for …