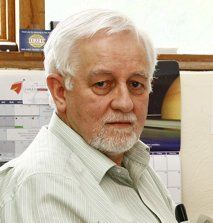 Apart from being the organiser of the Unlock the Past cruises, and founder of numerous other ventures such as Gould Genealogy  & History which is Australia’s biggest genealogy retail/webstore, Alan Phillips is one of the presenters on the upcoming 4th Unlock the Past Cruise.

Having started his own family history back in in the 1970s, it’s been a lifelong passion, though work has dominated his time over the past 20+ years which has put his own research on hold.

Despite having his own research on hold, Alan loves promoting Australian genealogy and history to the world, and does that through his various businesses.

Q1. Think back to your childhood … now what is your favourite memory from that time?
A very happy time generally, living in rural communities, with close ties with my paternal grandparents, and umpteen cousins and uncles and aunts.

Q2. There’s always ‘something’ that sparks an interest in genealogy/history? What was it that sparked your interest?
The lead up to the 125th anniversary of the Gumeracha Baptist church in 1971, the oldest continuing Baptist church in South Australia and possibly Australia. I found many of the records for this in my wife’s family, and in the process discovered it was 128 years old, not 125! These records also contained a lot of family history, especially on the Randells, Gumeracha and River Murray steam navigation and Baptist pioneers. This lead to discovering other old South Australian families in the Kellys, Hannafords and others. It then occurred to me that I (not just my wife) also had a family history and recalled hearing of my Cornish Phillips and Kemp families, Irish Cosgrove, Finnish Winter and Dutch/German Beecken families. And it took off from there.

Q3. How old were you when you developed an interest in this hobby?
25.

Q4. What countries across this big wide world did your ancestors come from?
England, Ireland, Holland, Germany, and Finland.

Q6. Do you have a genealogy mentor or idol? Someone who has deeply influenced you in your research along the way?
Yes, Don Grant, who ranks (maybe alongside – but not surpassed by – one or two others) as the most influential genealogist Australia has seen. As a book person myself I soon found (early 1974) History House Bookshop in Melbourne which Don and Evelyn Brown operated. Don invited me for an evening to his home – and gave me a great introduction to genealogy research as it was at the time. Only three Australian genealogy societies existed prior to 1973. The number of Australian genealogy books could be counted easily on one hand (Puttock and Hansen!) and the British ones did not need much more. No BDM indexes, few index of any kind, no computers, genealogy programs and no internet. Oops this is lapsing into a history! In 1976 we arranged with History House Bookshop to bring a selection of books to sell at SAGHS meetings, then held in the Colonel Light room of the Adelaide Town Hall. In 1977 History House Bookshop ceased trading at the 1st Australasian Congress, which itself was one of many of Don’s legacies. Don said “you have got all Australia now”. And ever after that Don considered himself the grandfather of what soon became Gould Genealogy. He was delighted to catch up and remind me of this on the occasions we met up over 29 years from when we first met.

Q7. We all know that your family history can reveal some amazing things. Have any of your discoveries resulted in a life-changing experience?
I guess the life changing experience was the encounter with Don Grant. It has been quite a ride since. Demanding, stimulating and fun – and for better or worse my family has been dragged along too. A big impact on us all.

Q8. What do you find most challenging about research?
Time. It used to be the time and tedium of hand drawing lots of family trees. Now with computers, internet etc at fingertips, it is finding time to even do any research of my own that is the challenge.

Q9. If you had a time-machine what relative (past, present or future) would you most like to meet?
Two I knew as a lad – grandpa Horrie Phillips to learn more about my Cornish ancestry and grandpa Otto Winter to ask why he left Finland, about his years as seaman and as tunneler on the Western Front in WWI (was he at Hill 60?). I would also like talk to gg grandpa George Phillips who was converted as young man under revival ministry in Cornwall by William Booth, then a Methodist evangelist, but later Salvation Army founder.

Q10. Still using that time machine, you’ve been propelled into the future five years, what do you see yourself doing?
If I am give another five years and health to go with it, maybe pulling together a lot of the family research and information I gathered in the 1970s and 80s – and the mountains of archives that have come my way as older relatives die. Perhaps overseeing the odd genealogy cruise, if there is enough ongoing interest to continue these.

Q11. What value do you think social media plays in genealogy these days?
It is useful, but in my view it is over-rated. We need to be its master, not the other way around. It could easily be a considerable distraction from better things. Do we really need to be so connected with the world and even all our relatives, not to mention exposed to so much rubbish online.

Q12. What do you do when you aren’t doing genealogy or history?
I like to read, and enjoy my family and grandchildren. When I do get time I will attend more cricket, edit 70+ years of film/video I have inherited and taken myself, learn the keyboard and build my own observatory in my backyard (the latter two probably pie in the sky).

Q13. What do you hope to get out of a genealogy cruise?
As organiser I just hope there are not too many calamities – and then enjoy the experience and stimulation of interaction with all in our group.

Q14. Share with us a few (up to five) of the genealogy websites that you tend to spend the most time on?
Sadly business time demands have almost completely shut out active research for me for two decades now. But when this eases the treasures of Trove promises a wealth of new discoveries – if the experience of colleagues is any guide.

Q15. Do you have any wise words for those just starting out in genealogy?
Genealogy is much more than connecting people. Get off the internet and computer, read the stuff you won’t find online – or even in libraries and archives – about the places, times, industries and circumstances your forbears were in. Visit ancestral stamping grounds. Meet and interview as many key relatives as possible – before it is too late. Copy all the photos and documents you can – before it is too late.. Organise a reunion. It is the people part of genealogy that is the greatest fun and most rewarding. And do something with all this.

For those of you who are going on the 4th cruise, here is the topic that Alan is expected to be speaking on, based on the current program:
– Future Unlock the Past cruises

AND IF YOU WANT TO KNOW MORE ABOUT ALAN’S VARIOUS COMPANIES, HAVE A LOOK AT: www.unlockthepastcruises.com/about
this page has on outline of the various Gould brands and sites – Gould Genealogy & History,  Archive Digital Books Australasia, Unlock the Past, Family Photo Book, Genealogy ebooks and Unlock the Past cruises.