Just How Popular is Genealogy?

Apart from being an awesome genealogy search engine, the team at GenealogyInTime come up with some awesome articles for their readers. And they are not afraid to tackle the hard questions relating to genealogy. Questions like “How Popular IS Genealogy?”

You might think that’s an easy question to answer. But take a read of this, and you’ll realise it’s a whole lot more complex than you realised. But it is a great question isn’t it?

The following post has been written by GenealogyInTime, and reproduced here with their permission.

If you were to ask 100 people if they have any interest in learning more about their ancestors, the vast majority of people would say ‘yes’. After all, everyone has ancestors. If it were not for our ancestors, we would not be here today. To put it another way, by design, everyone is inherently interested in their ancestors.

Now go back to those same 100 people and ask a slightly different question: would you be prepared to commit significant time and resources to learning more about your ancestors? You don’t need any deep insight to realize most people would say ‘no’.

The difference between these two questions (Are you interested in your ancestors? versus Do you want to devote time and resources to finding your ancestors?) is what fundamentally lies behind the confusion as to the popularity of genealogy. Ask the first question and genealogy looks to be very popular. Ask the second question and all of a sudden genealogy looks to be a much smaller pastime.

Why Genealogy is Different
Genealogy is not like other pastimes. In fact, it is not really a pastime at all. Genealogy is a field of study that is integral to the human condition (see the article Why Genealogy is Important). As a result, it is perhaps more relevant to talk about levels of interests rather than just a single interest when discussing genealogy.

The diagram below illustrates the concept. It is GenealogyInTime Magazine’s interpretation of the interest levels in genealogy. Interest is divided into four groups. Each group in the diagram is essentially a subgroup of the previous (larger) group. 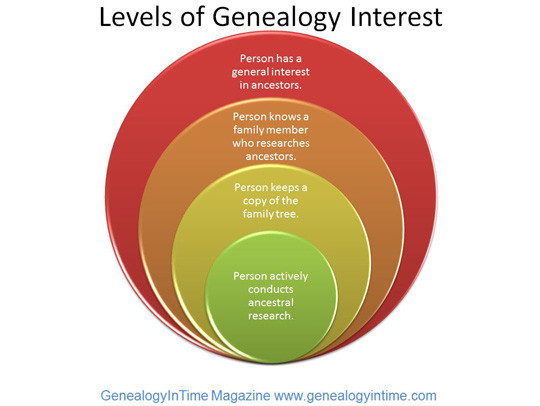 This diagram shows the major levels of interest in genealogy. When talking about the popularity of genealogy, it is important to specify what level of interest is being considered.

The outer and broadest group represents people that have a general interest in genealogy. This would be a large portion of the general population. Surveys that ask broad questions about an interest in genealogy will encompass this group. It generally shows genealogy being as popular as gardening, which is viewed as one of the most popular pastimes in the world.

For those who have a general interest in ancestors, there is a subgroup that has knowledge of a family member (however distant) who researches ancestors. In the diagram above, this would be the second group.

The third group would be people who keep a copy of the family tree in their possession. These people have more than just than a passing interest in genealogy. They obviously feel that ancestors are important and they want to know more about them. They probably, however, have not done the actual ancestral research. They would most likely have gotten the family tree from a family member.

By thinking of genealogy as a hierarchy of interests, it is much easier to understand conflicting survey and reports on the topic. Interest in the genealogy essentially ranges from the casual to the more serious. For the reminder of this article, we will concentrate on the core group: determining how many people actively conduct ancestral research.

Ancestry.com is the world’s largest genealogy company. Many of their television ads are designed to attract people who have a casual interest in genealogy into the core group of ancestral researchers. The core group is where a person is much more likely to purchase Ancestry.com services.

How Many People Research Their Ancestors?
To answer the question of how many people actively conduct ancestral research, we are going to approach the issue from three different angles:

How Many People May Have Conducted Ancestral Research?
Everyone may have ancestors, and most people may have some interest in genealogy, but not everyone needs to research their ancestors. This is an important distinction that is often lost in the discussion on the popularity of genealogy.

Usually, one member of an extended family does most of the ancestral research for the entire family. This imposes something of a conceptual limit to the number of people who actually need to research their ancestors.

Every family seems to have the proverbial great aunt who has done most of the genealogy for the extended family. Using this as the starting point suggests that (for most families) at any given time, there is perhaps one out of three generations currently conducting serious ancestral research.

This diagram demonstrates 3 generations of a family tree where each generation produces 3 children. Spouses are not included in the diagram. This is done to prevent double counting with other family trees in the general population. As well, for the purposes of simplifying the diagram, only one child group out of the three possible child groups is shown.

In the diagram above, there is one great grandparent, three grandparents, 9 parents and 27 children. In total, there are 40 people in this family group. Based on our estimate, only one person in the family group is likely to be doing ancestral research.

This means only 1 out of 40 people would actually be conducting genealogy research. Extending this logic to the general population suggests that at most we would expect about 1/40th of the population to have done genealogy. This works out to 2.5% of the population. We would view this number as an upper limit to the size of the field of genealogy.

The table below shows the current population for the all major English-speaking countries. Also included is an estimate of the maximum number of people expected to do genealogy in each of the countries based on our 1/40 rule. It shows that in aggregate there are at most some 11.2 million people who have done genealogy in the English speaking world. 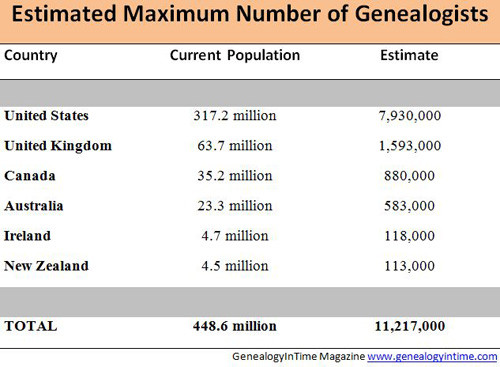 This table shows the current population of each major English speaking country with an estimate of how many people may have researched their ancestors.

Focus on the Internet
Genealogy is primarily about the exchange of information. With the exception of books and some records, there are few physical products to exchange. This is different from most other fields of endeavour (such as gardening or coin collection), where the physical exchange of product is a major focus.

The Top 100 List is based on the popularity of genealogy websites as measured by Alexa, the internet traffic people. It is not based on our own personal preferences or biases. As a result, the list is an objective and comprehensive assessment of the genealogy marketplace.

With the assistance of an outside firm, we were able to translate Alexa rankings into a reasonably accurate estimate of the number of daily visitors to each genealogy website. This calculation was based on internet traffic at the beginning of 2013.

The table below shows the number of daily visitors to the top 10 genealogy websites. Collectively, these websites get about 113,500 visitors a day. Ancestry.com (the #1 genealogy website) gets just over 1/3 of that total. 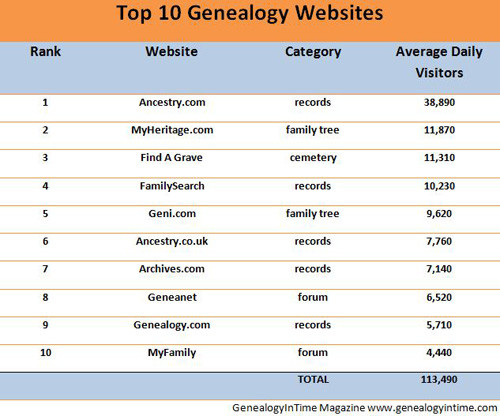 This table shows the average daily number of visitors to the top 10 genealogy websites as of January 2013. Note how Ancestry.com dominates the listing.
Source: Top 100 Genealogy Websites for 2013.

As far as we know, GenealogyInTime Magazine is the first to publish accurate estimates of internet traffic to genealogy websites. The calculation process was involved. It required the assistance of an external firm, who analysed hundreds of internet websites to create a statistically accurate logarithmic formula to convert Alexa rankings into an estimate of visitor traffic.

We then extended our methodology and analysis to all the websites in our Top 100 List. What we found is that the top 100 most popular genealogy websites in total get on average 245,730 visitors a day. 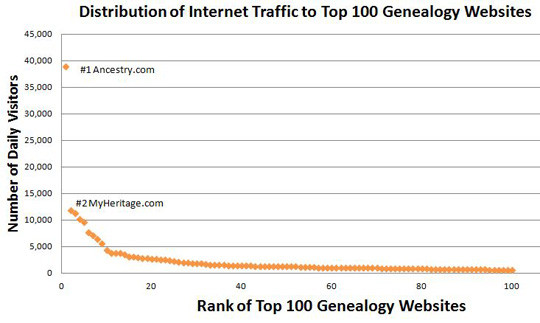 Using this drop off in demand as a guidepost, and using some logarithmic math, we estimated the daily internet traffic to all genealogy websites to be very close to 300,000 visitors per day.

On an annual basis, this means genealogy websites get some 108 million visits a year. Although this can seem like a big number, it is small compared to many other endeavours on the internet. For example, Google gets well in excess of 108 million queries an hour.

With 108 million visits a year to genealogy websites, and assuming an average visit of once a week, results in an estimated 108 million/52 = 2.1 million active genealogists. That is, at any given time, there are about 2.1 million people in the major English speaking countries who are active in genealogy. 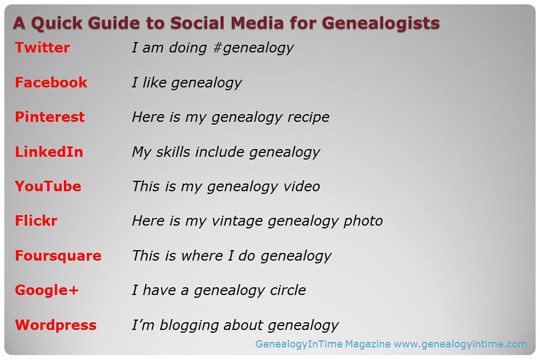 Social media is starting to play a larger role in facilitating genealogy. The image above is GenealogyInTime Magazine’s quick guide to using social media for genealogy. Feel free to like, tweet, pin, copy or blog this.

There is a lot of uncertainty, of course, as to how frequently people visit genealogy websites. This can have a big impact on the measure of active genealogists. The discrepancy between 2.1 million active genealogists and the 11.2 million theoretical number can also be partially explained by the observation that many people tend to drift in and out of genealogy.

Another factor is that there is a significant portion of families who cannot or will not do genealogy. Many people simply feel their ancestors come from a part of the world that lacks good genealogy records.

As more records come online each year (particularly from less developed regions of the world), presumably this should encourage more people to trace their ancestors. This leads to the next question: is genealogy growing?

Is Genealogy Growing?
To determine if genealogy is growing, we applied the same methodology to the data collected the previous year in 2012 for our article Top 100 Most Popular Genealogy Websites of 2012. This allows us to determine if the field of genealogy has grown between 2012 and 2013. The results are shown in the table below.

This table shows genealogy is growing at a healthy clip.

The table above shows genealogy grew a healthy 20% over the past year. In fact, the number of daily visitors to all genealogy websites has grown from about 250,000 visitors a day at the beginning of 2012 to about 300,000 visitors a day at the beginning of 2013. Part of this growth may have been due to the release of the US 1940 census, which was fully indexed by the Fall of 2012, and by the release of the Canada 1921 census in the Summer of 2013. The release of a major census always increases interest in genealogy.

Reconciling to Ancestry.com Numbers
Our estimate of 2.1 million active genealogists can be reconciled as follows: according to financial statements filed by Ancestry.com, it had approximately 2.0 million total subscribers to Ancestry.com branded websites during the same period as we conducted our analysis. Ancestry works on the negative pledge approach for its subscriptions, meaning subscriptions are automatically renewed unless a person actively cancels them. Assuming that 90% of the subscribers are active users (in other words, 10% of people forget to cancel their subscriptions immediately), this would imply that Ancestry has 1.8 million active genealogists.

Want to know the Alexa ranking of a website? The free (and very popular) Genealogy Toolbar has a built-in Alexa meter that will tell you the ranking of any website you visit on the internet. It also conveniently incorporates the Top 100 List so you don’t have to bother bookmarking any new/interesting genealogy websites you find on the list.

We will continue to monitor the popularity of genealogy and report back on its growth. Certainly, our research would suggest there is ample room for genealogy to grow.

So there you go. I know it’s a long article, but it is a comphrensive one. And it does make you rethink just how popular genealogy really is. 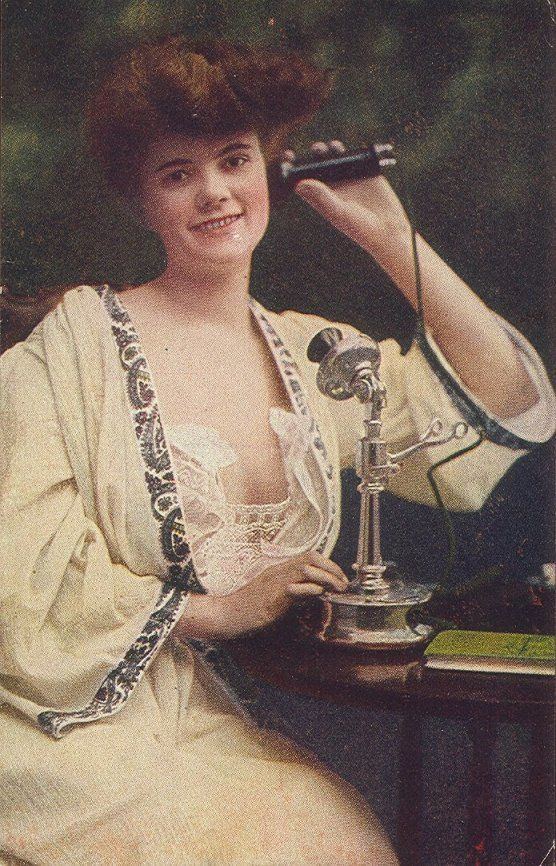