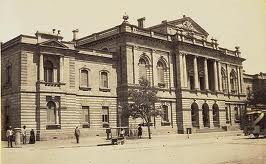 If you are researching South Austalian ancestors, here is some good news as it is all about easier access to records!

Until now accessing South Australian court records has not been an easy task, as you needed to go to the Supreme Court itself in Victoria Square, Adelaide.

Now thanks to the efforts of the Friends of South Australia’s Archives Inc., who have managed to get legislature changed, access to many records held by the South Australian Supreme  Court is now easier than it ever has been, as they have been transferred to State Records SA.

So while it would be fabulous to say they’re online and downloadable … NO, they’re not, we’ll just have to keep dreaming on that one! But we do still have to thank Graham Jaunay and the Friends of South Australia’s Archives for even making the current (new) level of access to these records possible.

The following announcement was written by Graham Jaunay …

At the 2006 AGM of The Friends of South Australia’s Archives Inc, member and widely known genealogist, Andrew Peake, raised the issue of the closure of SA Supreme Court records and in particular nineteenth century divorce records as a consequence of new rules. They had previously been available through State Records of SA. At the following committee meeting of The Friends, Graham Jaunay pointed out that the closure of such records was of major concern to many researchers, academics and students and as a consequence the group decided to address the matter especially with regard to the records generated in the nineteenth century which were then well over one hundred years-old. Although The Friends committee met approximately four times a year, no one at that stage realised that this process would not reach a resolution until June 2013.

A series of meetings and correspondence between The Chief Justice in concert with the Registrar of the Supreme Court and The Friends representatives ensued over the next years. Graham Jaunay also wrote an article on the topic that was published in The Friends of South Australia’s Archives in their March 2008 newsletter.

In August 2011 the Court revealed that the matter was beyond their ability to address and outlined the state of affairs when the Registrar wrote to The Friends on 15 August:
‘The Chief Justice and I are of the view that it is not possible to improve access any further without legislative change to section 131 of the Supreme Court Act. We are in favour of a change allowing unrestricted access to records 100 years old, subject to any express order of the Court to the contrary.’

It was then realised that the records had not been withdrawn as a consequence of new rules, but in fact because the Court had become aware that releasing information was contrary to existing rules!

The Friends committee wrote to the Attorney-General requesting improved access to these records in January 2012 and following discussions with the Chief Justice the Cabinet decided that an amendment would be made to the Supreme Court Act 1935 to enable free access to court records that were over one hundred years old and the Attorney-General advised The Friends committee accordingly on 14 June 2012.

At the time the Attorney-General was uncertain when the amendment would be made but indicated he intended to include it in the next omnibus Bill generated by his office. This came to pass in 2013 and was passed into law and became effective on 9 June 2013.

This is very good news because the courts are the third arm of Government dedicated to the administration of justice according to law. As such they constitute an essential part of our democratic framework.

The work of all arms of government should as a matter of principle be conducted openly and in public so far as possible. While I have no issue with this aspect as far as the courts in Australia function, the ability to access archived information is not so open. In my view this information should generally be accessible unless there is good reason for withholding particular information.

It is necessary to point out that the change to the Act only opens up records over 100 years old. It is still possible to access recent records, but the researcher will need to adopt the process in vogue for the past decade or so for all records held in the court. Oned also has to be aware that the access request may be refused.

To access these modern records the researcher needs to approach the Supreme Court Registry in the basement of the Sir Samuel Way Building at 241- 259 Victoria Square. (Note this location differs from the Probate Registry.) If unsure what records are available then a consultation of the series lists (GRG 36) held at State Records of SA may be required as the first step. Therefore the trip to the Court may require a stop over at the State Records of SA Reading room at 26 Leigh Street or accessing the material online. Note that State Records operates on restricted hours: Tuesday to Friday 9:30 to 3:30pm.

The Supreme Court Registry (Monday to Friday 9:30 to 4:30pm) will determine if the request for records is appropriate. It will then order the records from State Records and vet them before allowing the researcher access for a fee (currently $21 per file to vet plus $7 per page copy fee). If the researcher is denied access they can seek access by an application to the court.

Having read the above please do not rush to a State Records of SA Reading Room just yet! The legislation is in place but the Court (who still owns the records) has to formally inform State Records. State Records expects that the access procedure, when in place, will be the same as for all other records in its custody but that has yet to be confirmed. Even then it is possible that some individual records may be deemed sensitive and closed.