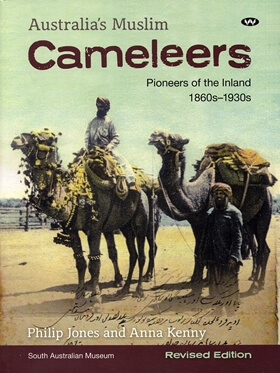 Until the South Australian Museum began preparing for the “Muslim Cameleers” exhibition in 2005, sadly this had been a part of history that little knew about.

The men and their camels were ‘unassuming and unsung heroes’ who helped to open up the vast interior of Australia by their remarkable capacity to deliver goods intact over incredible distances.

The exhibition, followed by the release of this book, ‘Australia’s Muslim Cameleers: Pioneers of the Inland 1860s-1930s’ is a rich pictorial history of these men, their way of life and the vital role they played in pioneering transport and communication routes across outback Australia’s vast expanses.

While only fragments of records relating to the cameleers and their history survive, the South Australian Museum is making sure that what does exist, survives.

Many of the images and artefacts in this fascinating account are published here for the first time, and the book contains a biographical listing of more than 1200 cameleers.