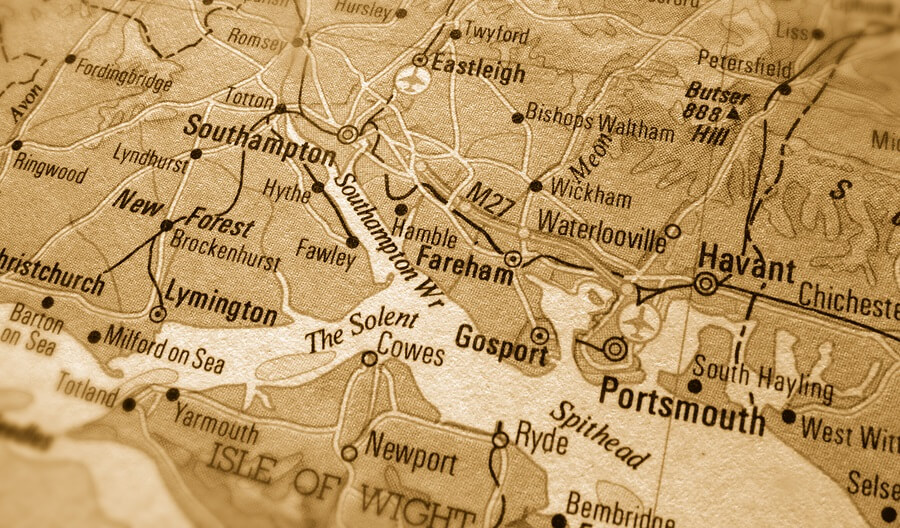 Portsmouth is a city in Hampshire that is located on England’s southern coast, and as with most English places, it has a long history that can be traced back to Roman times.

Being on the coast, Portsmouth has been at the forefront of the manufacturing and maritime industries for centuries, and has a significant naval and shipping port which was the last place many of our ancestors saw of England before emigrating to distant shores.

But there were plenty of locals who lived and worked in the town (later city) of Portsmouth too. In 1801 there were approximately 32,000 residents living there, but by 1871 that figure had exploded to 112,000.

Findmypast now has a collection of almost 4 million Portsmouth records online, thanks largely to a partnership with Portsmouth History Centre.

The records are full of fascinating details of Portsmouth life through the ages provide researchers from all over the world with the opportunity to uncover the stories of the inhabitants of the UK’s only island city for the very first time. Fully searchable transcripts of each original document are also included, enabling anyone to go online and search for their Portsmouth ancestors by name, location and date.

Hampshire, Portsmouth, Portsea Island Rate Books
Search through over a million pages of poor rate books from as early as 1700 through to 1921. The books recorded the amount of rates paid at each property, ownership of the property, and its location in the parishes of Portsea and Portsmouth. Discover the history of your ancestral home, today. With each record you will find a transcript of the vital facts and an image of the original rate poor.

Poor rate books were records of the amount of rates paid and by whom. Rates were levied annually and collected from both property owners and occupiers. The money was used for local poor relief. The Poor Law Act of 1598 made the parish responsible for the poor. The original records are held at the Portsmouth History Centre.

Hampshire, Portsmouth Hospital Records
Search for your ancestors in this fascinating collection of assorted hospital records and medical journals from St James Hospital between 1878 and 1918. At that time, the hospital was known as the Portsmouth Lunatic Asylum. Each result will give you a transcript of the vital facts and an image of the original hospital document. Images may provide you with even more information about your ancestor’s life, condition and treatment.

The Portsmouth Hospital Records have been digitised by Findmypast from the collection held by the Portsmouth History Centre. The collection includes a range of documents from the years St James Hospital operated as the city’s lunatic asylum including civil registers, deaths, indexes to admissions and discharges, maintenance ledgers, patient notes, registers of discharge and transfers.

Patient notes recorded the individual’s progress from their condition when they first entered the hospital and how or if the person improved. You will find notes such as, ‘delusions of grandeur’, ‘excited’, ‘clean’, or one patient was recorded as claiming she was the ‘Queen of Brighton’.

With every results you will find an image of the original document and a transcript of the vital facts. The transcripts may include a combination of the officer’s age, birth year and birth place as well as their trade or calling, years of service and dates of appointment and discharge. Images may contain a variety of additional details including physical descriptions, photographic portraits, service histories and reasons for discharge/retirement.

Hampshire, Portsmouth Quarter Sessions Browse
Explore thousands of criminal records from these court Quarter Sessions, discover if your Portsmouth ancestors had been caught up in a criminal activity. Findmypast’s browse search allows you to search each Session register from beginning to end. As well as the accused’s age, aliases and home parish, the records will provide you with a wide variety of details relating to their offence, trail and sentencing.

The courts of quarter sessions were held over a number of days in rotation at different locations at four set times each year. They dealt with serious non-capital crimes, and formed the middle tier of the court system. Quarter sessions were presided over by unpaid magistrates, also known as justices of the peace, appointed by the Lord Chancellor. At each session, two juries would be elected. The Grand Jury’s job was to hear the evidence against the accused and to decide whether the case should go to trial. If they sent it forward it was the turn of the Trial or Petty Jury who would decide guilt.

Hampshire, Portsmouth Burials
Was your ancestor buried in Portsmouth, Hampshire? Discover your ancestor’s burial entry in over 129,000 additional Portsmouth parish records to uncover the location of their final resting place. The new additions cover Portsea, Highland Road and Kingston cemeteries between the years 1831 and 1902.

Results will provide you with transcripts and images of the original register entry. Transcripts will reveal a combination of the deceased’s birth year, death year, age at death, burial date, burial location, denomination, occupation, residence and relatives names. Image may provide additional details such as the name of the minister who performed the ceremony.

Please note: you will need a subscription to be able to view these records and you can find subscription details here, or you can sign up for a 14 day free trial if you want to check it out first.