Speakers Announced for the 5th Unlock the Past Cruise 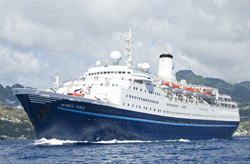 It was just over a week ago that we announced that the 5th Unlock the Past Cruise which is on in July 2014 was open for bookings, and already there has been strong interest in inquiries and bookings. Since then the organisers have been busy finalising the speakers for this cruise.

Nine presenters from four countries (England, Scotland, the United States and Australia) make up the presenters team for the 5th cruise, and each bring their own specialties in topics, which will make for yet another fabulous genealogy event.

The program is expected to have 35-40 presentations in 20-25 time slots, and you can be rest assured that there will still be plenty of time to sightseeing everywhere.

Paul Blake (England)
Paul Blake is a full-time researcher, lecturer and writer, with over twenty years experience. Many would know him through his books, The complete guide to creating your own family tree and Discover your roots (UK and US editions), or his articles or comments in magazines such as Family History Monthly magazine, and Your Family Tree magazine and other periodicals. Paul also contributed to the highly successful Readers’ Digest book, Explore Your Family’s Past.

Paul lectures widely on a variety of genealogy and related subjects, in England, in North America and elsewhere overseas, and on cruise ships.

For those who have been to UK genealogy events, you’d probably know Jackie for being the ‘hat lady’.

Jackie began seriously researching and recording her ancestors when moving into her grandparents’ house, becoming the sixth generation to live there.  An interest in house and local history followed subsequently turning into a new career.  During 13 years teaching family history, Jackie has supported events in universities, country houses and museums.  She has keen interest in sharing knowledge, enthusiasm and the skills needed to accurately research and record family history.

Marie runs a variety of training courses and is also a speaker on genealogy topics, which can be delivered live online or at various locations. She has spoken at events across Scotland and at the RootsTech conference in Salt Lake City. She has also delivered live webinars with up to 1000 participants from across the world.

A prolific writer, Jayne writes regular readers’ photo dating columns and photographic and dress history articles for several British, Irish and Australian magazines. And to date, she is the author of six family photograph and fashion history books.

As well as being an author, Jayne is also an active teacher and hands-on participant in UK history and genealogy events. While dating and analysing images for private individuals and organisations is another aspect of Jayne’s services.

The 5th Unlock the Past Cruise will be Jayne’s first genealogy cruise and she’s really looking forward to it.

Lisa Louise Cooke, Genealogy Gems – http://lisalouisecooke.com &  www.GenealogyGems.co
Lisa Louise Cooke is the owner of Genealogy Gems, a genealogy and family history multi-media company.  She is producer and host of the Genealogy Gems Podcast (with over 1.3 million downloads) the popular online genealogy audio show, as well as the Family History: Genealogy Made Easy podcast. Her podcasts bring genealogy news, research strategies, expert and celebrity interviews and inspiration to genealogists in 75 countries around the world.

Lisa regularly writes for magazines, is the author of four books including Turn your iPad into a genealogy powerhouse. She’s produced the DVD series Google Earth for Genealogy, has 60+ videos on her YouTube Channel, and if all that isn’t enough, she is an instructor and curriculum developer for Family Tree University, and is a regular speaker at genealogy events.

Rosemary Kopittke (Queensland, Australia)
Rosemary has been tracing her family history since 1985. She has numerous tertiary qualifications, the most recent being the Certificate in Genealogical Studies (English Records) with the National Institute for Genealogical Studies. Currently works as a consultant for Gould Genealogy & History and she is regularly invited to speak on findmypast and other topics at events in Australia and New Zealand and has presented on all the Unlock the Past cruises.

She has published numerous indexes to cemeteries and government records and she is editor of Unlock the Past publications and author and contributor to several.

Mike Murray (Western Australia, Australia) www.timetrackers.com.au
Mike’s interest in genealogy started in 1989, sparked by the sudden death of his mother and the realisation that she was the font of all family knowledge, which had now gone. Mike resolved to find out more about the family’s roots, and has been successful in tracing his mother’s side in Ireland for many generations and the Murray family’s Scottish roots back to the 1600s. Like many of us, the quest for his family roots aroused his passion for genealogy and history.

Mike and his wife, Lesley Silvester will host a fascinating evening presentation of story and song called Strangers on the Shore on the cruise. It’s all about Western Australia’s dramatic and moving Maritime past – shipwrecks, pirates, triumph and tragedy,and you’ll get the chance to sing a verse or two.

Lesley Silvester (Western Australia, Australia)
www.timetrackers.com.au
Lesley is a Londoner who came to Australia with her family in 1961. After a career in nursing and administration, Lesley’s long-standing interest in genealogy resulted in her starting the busy genealogical firm TimeTrackers in 2000.

TimeTrackers has helped thousands of clients across Australia and in the UK, New Zealand, USA and a smattering of other countries. Lesley’s interests are historical and genealogical research and education.

Lesley and her husband, Mike Murray will host a fascinating evening presentation of story and song called Strangers on the Shore on the crusie. It’s all about Western Australia’s dramatic and moving Maritime past – shipwrecks, pirates, triumph and tragedy. And you’ll get the chance to sing a verse or two.

Helen Smith (Queensland, Australia)
helenvsmithresearch.blogspot.com.au
Helen has been researching her family since 1986 when her mother lamented the fact she had never known her grandfather, George Howard Busby. Helen found some information and a newspaper photo of him, was hooked, and has been addicted ever since with research in Australia, England and Ireland.

With a day job as a Molecular Epidemiologist, and strong interest in infectious diseases and Public Health through the ages, Helen fits in genealogy whenever she can.

She is the author of Death certificates and archaic medical terms, has written articles for Australian genealogy magazines, is the author of a number of blogs and has spoken to a wide variety of audiences around Australia, New Zealand and on previous Unlock the Past  cruises.

So trust me, if you want a cruising holiday, some fabulous sightseeing around the UK, and a great genealogy conference all in the one, don’t delay in booking.

You’ll find further details, including pricing, and booking information on the 5th Unlock the Past Cruise here.

Into social media? For Facebookers, “like” the Unlock the Past Cruises page, and if you’re on Twitter use the #UTPcruise hashtag.