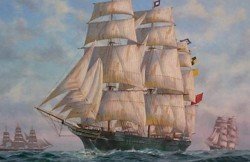 The world’s oldest surviving clipper ship, the City of Adelaide, will shortly begin her final voyage to South Australia and it is hoped that it become one of the state’s  major tourist attractions.

I last wrote about the City of Adelaide Clipper ship back in September 2010, when it was first mentioned that this historic ship was sitting in a dock in Scotland and was hoping to make her last voyage back to Adelaide, but to do so required some funding. You can read the earlier article here.

Now nearly 3 years later, and at a cost of around $4 million, not to mention the never-ending effort put in by preservation campaigners, the City of Adelaide is about to embark on her last journey, heading back to South Australia. This ship is considered of major historical importance to the state of South Australia as back in the 1800s thousands of migrants made the long and arduous voyage to Australia, all coming by sea. And the only sailing ship of this trade to survive is the City of Adelaide.

Built in 1864 the City of Adelaide is famous for being specially designed as a passenger ship. For over a quarter of a century the City of Adelaide carried thousands of English, Scottish, Cornish, German, Danish, Irish and other migrants to South Australia. Today, approx. 250,000 people throughout Australia can lay claim to having an ancestor who emigrated on that ship. 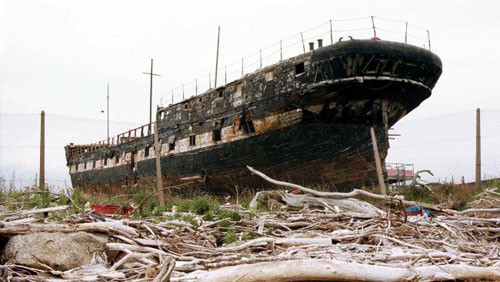 The City of Adelaide clipper currently weighs over 450 tonnes, but in her sailing days she would have weighed 1500 tonnes. In her current state (hull only), the clipper is 54 metres long, which is longer than an Olympic swimming pool (50 metres). And originally with jib-boom – she was 74 metres, which is 4 metres longer than a 747 aircraft. So you can imagine that transporting something this big, that’s made of wood that has been out in the weather for 150 or so years isn’t an easy task.

Set to leave her current home of Scotland within the next few weeks to begin the 20,000 kilometre journey,  the City of Adelaide won’t be sailing it this time. Instead she will be encased in a steel cradle, weighing 100 tonnes which has been specifically made. Using the cradle will enable the ship to be lifted and moved safely, and will be transported by barge on what will be a slower voyage that what she used to take, arriving in Port Adelaide in 2014.

For more information (including a countdown until it leaves Scotland), head on over to the City of Adelaide website. They even have a Wiki which had diaries of voyages, as well as passenger lists for the 24 years it served as a passenger vessel.

While looking around online for City of Adelaide ship, I came across the CityOfAdelaide1864 website, which has some beautiful photos of the ship. And as always, we can rely on Wikipedia for a heap of information about it’s history. 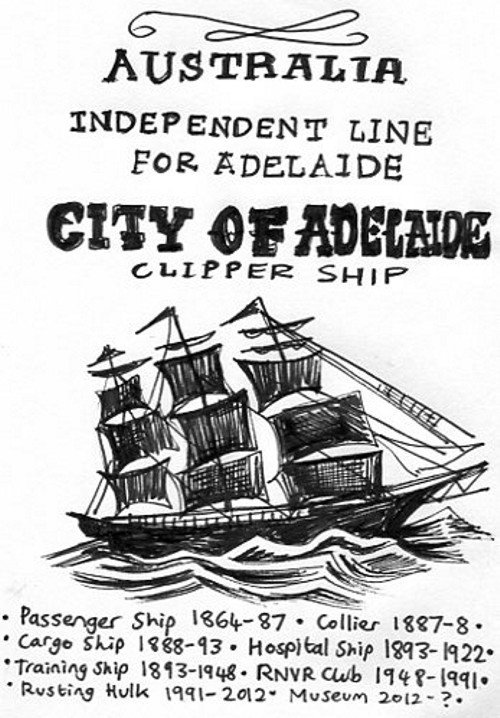 And I had to share the picture above that I found on Katy’s Arty Blog, which puts it so simply as to what and when the City of Adelaide was used for over the many years. 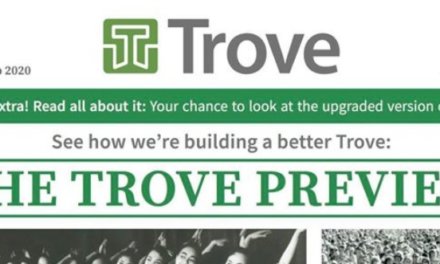