Unlock the Past Cruises (International) is Launched

For anyone who is loves genealogy and cruising this is something for you, no matter where you are in the world. Australia’s Unlock the Past are bringing genealogy cruising (geneacrusing) to the world by planning a truly interational range of cruises to their repertoire.

Now I don’t often quote press releases in full, but on occasions they need to, so here is the Press Release from our sister company Unlock the Past on their new venture Unlock the Past Cruises.

Adelaide, South Australia, 25 June 2013 – Unlock the Past announces Unlock the Past Cruises, an international program of history and genealogy cruises. This expanded cruise commitment follows on from the success of the first three Unlock the Past cruises, high interest in the fourth in February 2014 and a proposed mid 2015 cruise from the UK/Europe to the Baltic. Now there is more choice:

– more cruises to choose from – two to four a year
– more and varied itineraries – anywhere in the world, wherever there is enough interest
– more price levels to suit different budgets – starting from under $1000
– more varied programs – some full conference programs with many presenters, others much smaller
– some conference focused, others more destination/itinerary focused

The fourth cruise in February 2014 is booking strongly. Further cruises under consideration include:
– a British Isles discovery cruise in mid 2014
– a smaller regional cruise from an Australian port or Auckland – Sydney late 2014 or early 2015
– a major Baltic cruise from UK/Europe mid 2015
– a transatlantic cruise November 2015
– an Australia – New Zealand cruise early 2016

Unlock the Past cruises combine relaxing cruises with world class history & genealogy conferences. All major conference cruises feature an international team of presenters and a program with international appeal. Shorter cruises will also have leading presenters. Some cruises are more conference focused. Others more on the destination and places visited.

What a fantastic and wonderful experience it has been. Great speakers and a good variety of topics. I now know that I am on the right track with my research. I was travelling solo yet felt I was part of a warm and friendly group. Thank you. – L. Nobes, 3rd cruise

Thank you … for your wonderful work in organising this cruise – we are now addicted to Cruising with Genealogy … you did a fantastic job … Congratulations. – M. & H. Ford, 3rd cruise

About Unlock the Past
Australian based Unlock the Past was established in 2009. It is the event and publishing division of Gould Genealogy & History which has served family and local historians since 1976. It is a collaborative venture involving an international team of expert speakers, writers, organisations and commercial partners to promote history and genealogy through innovative major events and a new publishing brand. It also maintains general and events directories online and is a cost effective marketing platform for partners. 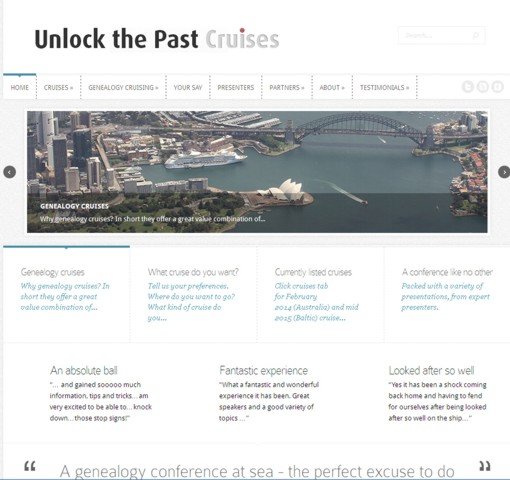 The genealogy cruises have grown to the point of needing their own website, so that’s what the team at Unlock the Past have done, and a very swish website it is.

On it you can find all the details about the upcoming 4th Cruise. Including the speakers, the program, the ship, the destinations, the cabins and of course the costs as well. Information on future cruises is also there under the “Cruises” button.

And to be sure you stay up to date with the latest news you can “like” their Cruise Facebook page, or sign up for the cruise newsletter.

I’ve personally been on 2 of the 3 cruises that have been held so far, and I have to say that I’ve never learnt so much genealogy in one go! As there are so many people with knowlegde on so many varying topics, there’s someone who can help you with everything, and you will come home with your head swimming with new ideas.

I hope to see you on a Unlock the Past Cruise in the future.