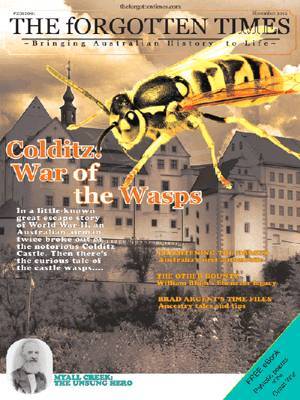 “The Forgotten Times” is a brand new Australian digital-only history (and genealogy) magazine.

Produced by a team of journalists dedicated to quality writing with a love of history and a combined experience of 70 years, ‘The Forgotten Times” is already attracting expert writers from the industry keen to contribute.

The 30 page e-magazine uses page-turning software with the ability of magnify pages for a closer look. Being a digital publication does mean that it is viewed online, or you can download a copy to your portable device.

The first edition of The Forgotten Times is packed full of extras, including a “How to” video on searching the New South Wales Police Gazettes from Ancestry.com.au, as well as a free digital copy of the Christmas edition of a unique WW1 magazine from 1915, an Australian history crossword, plus the following articles as listed:

Colditz: War of the Wasps. The untold WWII story of an Australian airman who escaped from the notorious Colditz Castle and enlisted stinging wasps in the Allied cause.

Captain Bligh’s Other Bounty. The much maligned William Bligh, when governor of NSW, won supporters among the settlers of an upper Hawkesbury River village where, to this day, men bear the middle name Bligh in his honour. Most notable is Malcolm Bligh Turnbull.

Never Seen Again. The mystery of the 1930s Aussie movie star and the ‘unsinkable’ boat.

Get a Horse! The arrival in 1901 of Australia’s first car cause quite a stir.

Myall Creek: the Unsung Hero. Captain Edward Denny Day, the man who brought the Myall Creek Massacre murderers to justice, has never been given the credit he deserves.

Pilot of the Airwaves. Officially, Australia’s first radio program was by a Sydney commercial station in 1923. But the official version is wrong.

What the Dickens. With a new film version of Great Expectations soon to be released, we join the quest for the real Miss Havisham.

Miscellaneous Mysteries. Ancestry’s Brad Argent presents curious and macabre tales from the Police Gazettes, as well as a video on how to REALLY search the police gazette records.

Days to Remember. Events from more than two centuries of Australian Decembers.

So go and check it out, it’s FREE … you can view this first issue online here: http://theforgottentimes.com, with Issue 2 due for release in February 2013. And you might like to keep up to date with the latest news from The Forgotten Times, by following them on Facebook. 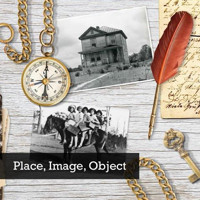