My Roundup of the Australasian Congress 2012 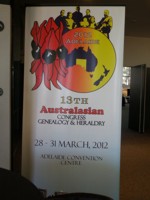 The 13th Australasian Congress was on last week (it seems longer ago already), and now that immediate backlog of 4 days off of work has been caught up, I figured it was time to sit and write my roundup of the event.

Let me just start by saying my take on Congress is likely to be quite different from others as I went purely as an exhibitor, and I didn’t attend any sessions, so cannot comment on any speaker or talks. These seem to be well covered by the bloggers who did anyway.

As with all events there were good points, and some not so good points.

First up the venue was lovely, and the stands looked great. It was held in the Adelaide Convention Centre, which is in the heart of the city, which was convenient for the many overseas and interstate travellers, particularly with accommodation nearby (ie. across the road). For us personally it was such a nice change to have an event in our home town. One where we didn’t have to pack up the van, drive for 2 days, exhibit, then drive for another 2 days to get home. So having it here in Adelaide was a novelty, though surprisingly I found it still as tiring for some reason.

Anyway we had a block of four stands which made a big square. Two sides were Gould Genealogy & History (with our books, maps, and scrapbooking products), one side Archive Digital Books Australasia (some of our CDs), and the other side Unlock the Past (the events). Anthea and myself (Alona) were kept busy with sales in every break, particularly morning tea, lunch and afternoon tea breaks. We were fortunate to have Rosemary Kopittke helping us on Wednesday and Thursday demo-ing the all new (in Australia) Flip-Pal scanner for us, which Jill Ball kindly took over doing on Friday and Saturday. As expected, everyone that saw it wants (or should I say NEEDS) one.

Alan Phillips of Unlock the Past spent pretty much the whole of Congress chatting to people. He was manning the Unlock the Past stand at times, answering queries about the next two Unlock the Past events (the Qld Expo in June 2012, and the 3rd History & Genealogy Cruise in February 2013), and also making the most to chat to speakers and exhibitors as time allowed.

The times when the meetings were on, was time when exhibitors got to restock their display, or simply catch up with other exhibitors. I did both over the 4 days.

It was lovely to meet Christine from Ancestry NZ, who filled in at the Ancestry.com.au stand as Brad was unable to attend due to another commitment. It’s always great to catch up with Cassie and Ben from Inside History Magazine who travelled from Sydney to attend. Other interstaters were the Findmypast.com.au team (Vicki, Emma and Melissa). It was great to catch up with Vicki again, and lovely to meet Emma and Melissa for the first time. I got to say hello to many from the South Australian Genealogy & Heraldry Society (aka Genealogy SA), also Lyall Kupke from the Lutheran Archives, the many people from the Adelaide Northern Districts Family History Group together and their User Groups, various people from the Public Libraries stand, David from Openbook Howden, Sue from Abbott Printers, Graham Jaunay from Adelaide Proformat – the list goes on.

I also had the pleasure of meeting Daniel Horowitz from MyHeritage for the first time, and re-catching up with Kim for the two days he was able to attend. I was even asked to help out on their stand while Daniel was doing his talks which was a bit nerve wracking – not because it was a hard to learn – rather I just hope I did their product justice (at least in a basic form). Before continuing I do need to thank Helen V. Smith for helping out manning their stand too when I couldn’t.

The contingent from Canberra’s Congress 2015 committee was out in force. They were easy to spot in their lime green t-shirts. If they have them available to buy at their Congress, I’ll certainly be in line for one. Lime green is my fav colour!!

One thing that all exhibitors found annoying, and disappointing was that despite the exorbitant cost we paid to exhibit we were not allowed to have any of the lunch, morning tea or afternoon tea that was on offer to the delegates. We all had to go and buy our own food and drinks elsewhere. One good thing that came out of this was that I found a shop right across the road from the Convention Centre which has THE best chocolate cake ever!!! So not all was bad.

Another thing that exhibitors found tedious, and I really don’t know the reasoning for it (maybe it was a Convention Centre requirement – I don’t know), was that we all had to sign in every morning, and out every evening. It just seemed wierd, and unnecessary … but I presume there was some reason for it. Never before in all of our years of exhibiting, have we had to sign in and out before.

And a disappointing thing was that the exhibition closed at 1.30pm on Saturday with us having to be packed up and out by 3.00pm, while the meetings continued through with the Closing Ceremony at 3.30pm. No doubt, the next event was being set up for later that day – but it still would’ve been nice to be there until the end.

If you would like to read what others have had to say about Congress, Jill Ball has compiled a list of all Congress related blogs on her Geniaus blog.

I’ve put a few photos below, you can see the full collection on our Facebook page. 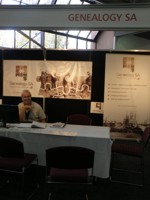 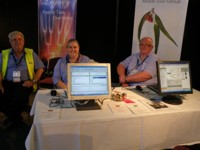 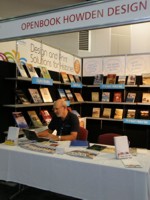 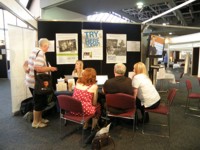 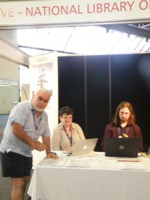 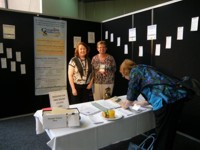 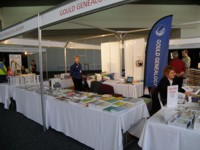 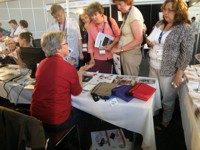 Unlock the Past Cruises (International) is Launched 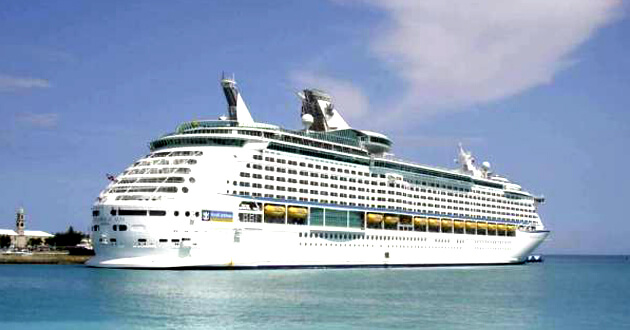