Highlight: Inky Fingers, The Life and Times of Elijah Tucker 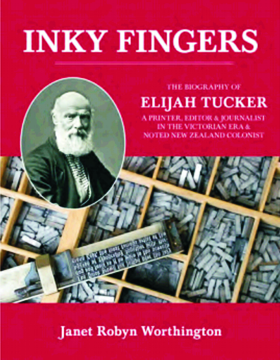 For a highlight this week I’ve chosen to highlight a recent release from well-known Australian genealogist, Jan Worthington.

This is a biographical family history exploring the life and times of Elijah Tucker (1811–1894), who was a printer, publisher, newspaper editor and writer and who emigrated with his family from London to New Zealand’s New Plymouth, then moved to the South Island in 1856.

One of New Zealand’s unsung pioneers, Elijah influenced early New Zealand society with his left wing political views, his wide education, reading and knowledge of literature and politics. His influence was felt through his involvement in many newspapers, including The Taranaki Herald, Marlborough Press, The Nelson Colonist, Wairau Record, Nelson Evening Mail, The Wanganui Times and The Wesport News.

Elijah was in business with his brother-in-law, Soho bookseller and publisher John Russell Smith (1810-1894). Their wives were the daughters of London printer and classical reader, James Caigou, who during his apprenticeship to Charles Roworth printed Jane Austen’s first novels. Elijah was acquainted with many influential people including, Karl Marx, David Urquhart, Professor Francis Newman, and pioneer leaders of New Zealand, such as Alfred Domett, Edward Stafford, Dr John Danforth Greenwood & Charles William Richmond.

Fully illustrated with over 120 photos, maps and pedigree charts, this book is completed with an index.

This is not a book that you can buy from Gould Genealogy, as it is only available direct from the author.