Genealogists love passenger lists. Seeing your immigrant ancestors name written there together with the date, ship and where they left from is right  up there in the excitement stakes!!

As of a few days ago you can view ship passenger lists online at UK family history website, www.genesreunited.co.uk.  The lists include people onboard ships departing British ports for long-distance voyages across the world from 1890 to 1960.

The passenger list records offer a range of information from simply the passenger’s name and age, to much more detailed information; the departure and destination ports, the ship’s name, date of travel as well as actual descriptions of the passengers themselves, such as, UK address, year of birth, marital status, occupation and nationality. Through these records it is possible to find some truly unique information about your ancestors who voyaged overseas.

The GenesReunited team have also discovered some famous names in their collection, such as a two year old Elizabeth Taylor, a 56 year old Alfred Hitchcock, a 22 year old Audrey Hepburn and finally a four year old Olivia Newton-John who was on her way from London to Australia.

that there can be two or even three originals of some of the passenger lists within the BT27 series. Such duplicates were written out again by hand (not produced using carbon paper). The differences between these different copies of the same list are usually cosmetic but there are sometimes also minor differences in content or in the Board of Trade’s annotations or stamps upon them.

These duplicate lists have been scanned to preserve the integrity of the BT27 dataset. Researchers should note that this means that occasionally you may see two entries for the same individual which correspond to two different original copies of the same list.

A solution is being designed so that customers will only be charged once for the information contained within these duplicate pages. 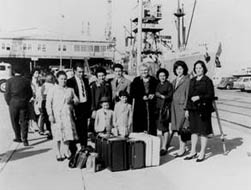 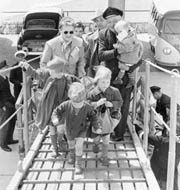 The passenger records cover the period of mass migration to Australia between 1947 and 1960 when an estimated 710,000 people travelled there from Great Britain.  This ‘golden age’ of migration to Australia was prompted by the launch of the Government’s ‘Ten Pound Pom‘ scheme to encourage Britons to emigrate to Australia and enhance the nation’s skilled workforce driving its economy forwards.

The easily-searchable and user-friendly the data will enable genealogists and family historians alike to view digitised images of the original ship passenger records online, which contain over 1.1 million pages, listing the 24 million passengers who travelled on long-distance journeys from UK ports.