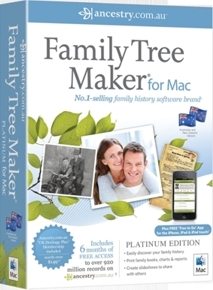 The long awaited (re-release) of Family Tree Maker for Mac is almost here. It was announced earlier this year as coming, and it is FINALLY coming!!! Due mid-late December 2010.

I know many of you have questions relating to this new version, so here are some of the common one’s that I’m hearing together with the answers:

Q. What type of Mac will the application run on?
A. You will need an Intel-based based Mac running Mac OS X 10.5.8 or later.

Q. How is the Mac version different from the PC version?
A. The Mac version has the same functionality as Family Tree Maker 2010.

Q. Can I download the software from the Family Tree Maker website?
A. No, at this time the software is available on CD only.

Q. Can I import a tree I created in Reunion?
A. Yes. You will need to export your file as a GEDCOM and then import it into Family Tree Maker.

Family Tree Maker for Mac is now available for pre-order and you can do so from our Gould Genealogy website.

Evernote and Genealogy: They’re Made for Each Other