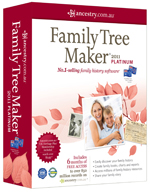 At long last I have some news for you regarding the 2011 edition of Family Tree Maker.

Windows Versions:
I know you’re all hanging out to hear just when the Family Tree Maker 2011 Australia & New Zealand edition will be released and shipped off to you … so are we. <grin>

After a call to the Australian distributors, they now advise that the release date of Family Tree Maker 2011 (Deluxe, Platinum and Upgrade) unfortunately has slipped a little, and they are now expecting their supplies to arrive in the second week of November. 🙁 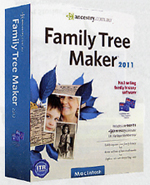 Macintosh Version:
Mac users who are eagerly waiting for news of the coming Family Tree Maker Mac version … the US publishers have just announced that they expect to start shipping orders in November. This also means that our Aus/NZ verison probably won’t be released this side of Christmas.

I will keep you informed on its status when we get more details.

FTM for Mac isn’t yet available as a pre-orderd.