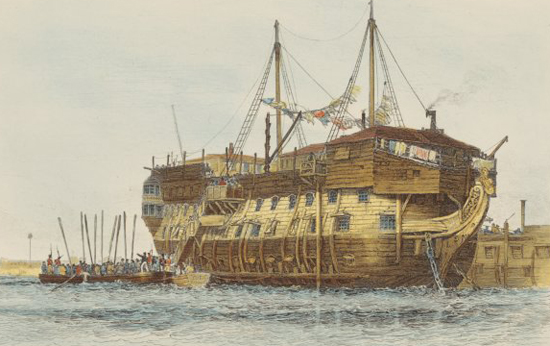 A fascinating collection, this consists of registers and letter books of prisoners on convict prison hulks in England between 1802-1849. A hulk is a decommissioned ship that is either technologically out of date or cannot make it through the open sea without taking on water, but is still able to float without problems. There were many of these ships available when engines started to power ships instead of sails, so the hulks were moored in harbors and used as floating prisons or for other purposes.

The hulks’ place in harbors also made it easier to hold and transport convicts being sent to Australia. The first prison hulks in England appeared after a 1776 act allowed them to be used to house prisoners.

The collection contains a letter book relating to the establishment of hulks written from 1847-1849 and the registers of prisoners on 19 different hulks between 1802-1849 – a total of about 200,000 records. Those covered are: Bellerophon, Captivity, Coromandel, Cumberland, Discovery, Dolphin, Establishment, Euryalus, Fortitude, Ganymede, Hardy, Justitia, Laurel, Leviathan, Perseus, Portland, Prudentia, Retribution, Warrior, and York (pictured).

The records reveal the lives of the convicts who were imprisoned on these hulks and detail each inmate’s name, year of birth, age, year and place of conviction, offence committed, name of the hulk and, most interestingly, character reports written by the ‘gaoler’ (prison officer) which provide intriguing insight into each convict’s personality.

Many of the 200,000 convicts held on board the floating prisons were awaiting transportation to Australia, but the hulks were unable to go to sea, having been stripped of their masts, rigging and rudders, and instead fitted with prison cells.

Typically, each hulk held between 200 and 300 convicts in dire conditions. Disease was rife and spread quickly as there was no way to separate the sick from the healthy in the cramped conditions. This meant mortality rates were high, with around one in three inmates dying on board.

The records will be of use to family and social historians, and anyone with an interest in the UK penal system. They detail the rather bleak conditions that those who fell foul of the law would have found themselves in.