Notable Citizens of Sydney – DATA CD – $27.50
This book is a compilation of Notable citizens of Sydney. It gives a photo and caricature of each person together with a profile, including their vocation, birth, education, hobbies, recreations, address and special features.

Book of Remembrance of the University of Sydney in the Great War 1914-1918 – DATA CD – $29.50
This is a ‘Book of Remembrance’, not simply a record of those who went abroad on active service in the Great War after becoming members of Sydney University or entering its employment. It contains a roll of honour, a roll of service, details of associated memorials and information on those associated with the university who worked at home or in munitions.

Australasian Medical Directory Compendium – DATA CD – $79.50
Australian Medical Directories contain useful information for social historians and those interested in medical history as well as those with ancestors within the medical profession.

Australian Pastoral Directory Compendium 2 – DATA CD – $69.50
If you are researching ancestors who were stockowners in Australia, the Pastoral Directories are a great resource. This compendium contains facsimiles of the years 1913, 1923, 1925, 1931, and 1954.

New South Wales Country Trades Register 1898 – DATA CD – $19.50
A wonderful guide, this is effectively a yellow pages of New South Wales country towns over a century ago. Listing over 800 towns alphabetically, each item then lists the services the town offers together with the person/s in that occupation.

Sydney Directory 1865 (Sands) – DATA CD – $29.50
The Sands’ directories are among the most comprehensive and best known of Australian directories. 1865 was the fifth year of release for the “Sand’s Sydney Directory”. Similar in style to earlier years, this one contains 13 directories in one.

New South Wales State Electoral Roll 1913 – DATA CD – $129.50
This compendium contains the state electoral rolls for all New South Wales districts for 1913 – almost 17,000 pages. Apart from the main roll some districts also have supplemental rolls. You will find the details of almost 1 million voters who resided in New South Wales at this time who were entitled (and registered) to vote. Importantly, the roll includes the names of many women qualified to vote for the election of members of the state parliament.

An Historical and Statistical Account of New South Wales – DATA CD – $39.50
Published in 1875, the fourth edition of this historic work includes the changes that occurred since the third edition of 1852. As with the first edition of 1834, John Dunmore Lang wrote this edition of over 1,000 pages almost entirely at sea.

Bailliere’s New South Wales Gazetteer and Road Guide 1870 – DATA CD – $29.50
This is the 2nd edition of this important 19th century gazetteer. It contains ‘the most recent and accurate information on every place in the colony’ – in 1870. It contains a wealth of information for historians and genealogists, and will interest the general reader as well. There are entries for towns and villages, lakes, rivers and creeks, islands, bays, hills and mountains, counties, hundreds, local government areas, electoral districts, stations, runs and other localities and features. It often gives latitude and longitude, populations, proximity to other towns, local industries, services such as coach and mail runs, hotels, churches, schools and much more. Pastoral tenants are also included, as are some of the principal landowners.

Handbook to the Colony of New South Wales 1858 – DATA CD – $7.50
This small, but very useful, book tells the history and current state (as at 1858) of the colony very concisely. Covering the convict period, the pastoral age, then the discovery of gold, this is followed by features of the colony, climate, productions, minerals, population, and social features.

New South Wales Government Gazette 1865 – DATA CD – $49.50
Government Gazettes contain a vast amount of historical and genealogical information. However they are largely an untapped resource. The few complete runs that are available are usually only found in major libraries. And even for researchers who do have access to these the sheer size and extent of the Gazettes is daunting.

New South Wales Government Gazette 1875 – DATA CD – $49.50
Tens of thousands of ordinary people and localities, small and large, are mentioned EVERY YEAR in Government Gazettes. But they offer researchers much more than simply names and places. They will help you reconstruct events and circumstances in the life of individuals and communities.

Australian Contingent: History of Patriotic Movement in New South Wales – DATA CD – $23.50
The full title of this publications is: ‘The Australian Contingent: A History of the Patriotic Movement in New South Wales and an Account of the Despatch of Troops to the Assistance of the Imperial Forces in the Soudan’.

Australia’s Fighting Sons of the Empire: New South Wales and Queensland – DATA CD – $29.50
This very rare record of many who fought in the Great War (1914-18) is now offered as a fully searchable facsimile of the original. Here is the New South Wales and Queensland edition of Australia’s Fighting Sons of the Empire, complementing the Western Australian volume of the same title as well as the variant editions of the ‘All-Australia Memorial’ (also to be published by Archive CD Books Australia, and various other biographical records of the the 1914-18 war.

New South Wales Country Trades Register 1898 – DATA CD – $19.50
A wonderful guide, this is effectively a yellow pages of New South Wales country towns over a century ago. Listing over 800 towns alphabetically, each item then lists the services the town offers together with the person/s in that occupation.

New South Wales Weekly Notes Compendium 1884-1900 (Court Reports) – DATA CD – $79.50
Digests or summaries of court cases were reported continuously in ‘The New South Wales Weekly Notes’ from 1884 to 1970 – then subsequently under a different title. This CD contains 17 years of Weekly notes from 1884 through to 1900. Though a digest or summary, many cases are reported in considerable detail.

Sydney University Calendar 1887 – DATA CD – $27.50
Old university calendars contain a wealth of information on people associated with the university as well as an insight into the courses of study offered and university life and culture generally. And this CD which is searchable on any name, subject or word you desire will open up access to much of this information that you may not have considered or found convenient to access in the past.

New South Wales Police Gazette 1879 – DATA CD – $29.50
Unique features of this particular year’s worth of issues is that they contain lists of Publicans’ licences issued. Information that these give is persons name, situation of hotel, and hotel name.

New South Wales Educational Gazette: Vol 3-1 (Jun 1893) to Vol 4-12 (May 1895) – DATA CD – $27.50
The New South Wales Educational Gazette was issued monthly and contains a wealth of information for family, local and educational historians. Now you can have two year the gazette to browse or search at your own convenience – a resource you may not have had ready access to, or time to use on a library – or perhaps may not have known existed. And the ability to search any word in the text enables you to check for any person, place or word in the text, a task too often too intimidating before this new searchable CD edition.

New South Wales Public Service List (Teachers) 1925 – DATA CD – $19.50
Being a List of Teachers permanently employed in High, Intermediate High, and Primary Schools on the 31st December 1925, arranged in alphabetical order. A listing of over 8000 teachers at schools throughout New South Wales at the end of 1925.

Drummoyne-Concord History Set – DATA CD – $29.50
This CD contains two books on the one CD. Both the Drummoyne and Concord local histories have been combined and are offered at a very special price. These publications commemorate centenaries of local government in Drummoyne and Concord Municipality in 1983, and they contain a numerous photographs and maps of the area, as well as details of early settlers, and mayors and town clerks.

History of Broken Hill: Its Rise and Progress 1908 – DATA CD – $19.50
This history written in 1908 to record the “Rise and Progress” of the town is a wonderful record of how far the town had come in such a short space of time. Covering the topics of council, churches, schools, newspapers, banks, tramway company, hospital, orphanage, ambulance, societies and associations, fire brigade, and sporting clubs.

The Hawkesbury and Shoalhaven Calendar, Directory, Guide and Historical Record – DATA CD – $19.50
Written for the people of the Shoalhaven and Hawkesbury districts in 1905, this book includes a large variety of general and household information, including a calendar, cultural and cookery guide, directory, historical record and useful household compendium. It also includes many photos and sketches.

Sydney Diocesan Directory 1901-1910 – DATA CD – $47.50
This set of Sydney Diocesean Sydney directories contains lists and details on all the Anglican clergy, cathedrals, committees, societies and schools of New South Wales as well as Anglican clergy lists for all other states in Australia. Including significant amounts of biographical information on those who held office in the Anglican church at this period of time.

Australasian Methodist Ministerial General Index 1896 – DATA CD – $19.50
This book comprises the names of ministers in the Australasian Wesleyan Methodist Church from the beginning. This second edition brings the appointments to the year 1896. It also indicates the principal offices which each minister has held from the Conferences. 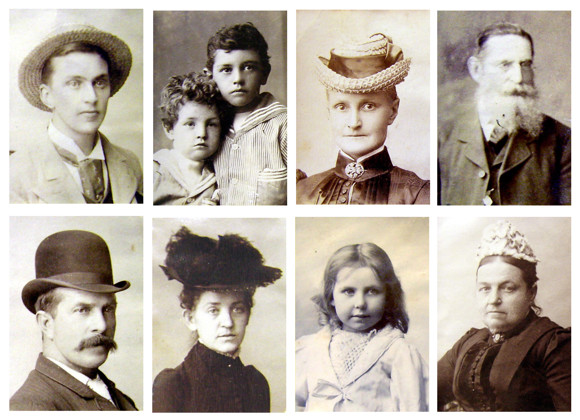 The Launceston Family Album: An Unexpected Source for Australian History