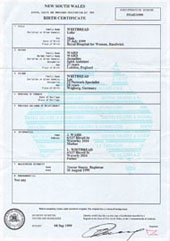 The announcement has just been been made that Ancestry.com.au and Ancestry.co.uk have added Australian Birth, Death and Marriage Index Records (aka Vital Records to our US friends) to their websites.

Featuring records of 15 million Australians, and dating back more than 200 years to when modern Australia was settled in 1788. It is estimated that one in three “Britons” have an Australian in their family tree. For genealogists researching Australians, the release of these records is a major stepping stone to helping them discover their family history. The Birth index covers 1788-1922, Marriage index1788-1959, and Death index 1788-1985.

You can read Ancestry’s own announcement about this on thier blog.

Chris Paton from Scottish GENES seems to have been the first blogger to pick up on the new records, and spread the word around about it. This was followed shortly after by Australian blogger Geniaus, who after testing records, had some very interesting comments to say about it. Liz, from Yarra Plenty Genealogy also has had a go, and has also found that these databases are useful, but many records seem to be missing. So if using these records, check them with other sources. Just because the record isn’t there doesn’t mean that they’re not recorded.

Call for Papers “Cornish Australians Who Changed our World”